a new report will help people take informed decisions about investing in the automobile sector. It includes details of how efforts to restrict greenhouse gas emissions will affect the profits of 10 leading automobile companies between 2003 and 2015. Toyota is said to be most prepared to face the emerging challenges, whereas Ford faces the maximum risks 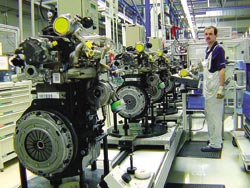 a new report will help people take informed decisions about investing in the automobile sector. It includes details of how efforts to restrict greenhouse gas emissions will affect the profits of 10 leading automobile companies between 2003 and 2015. Toyota is said to be most prepared to face the emerging challenges, whereas Ford faces the maximum risks.

The report has been prepared by the World Resources Institute (wri) -- an organisation based in Washington dc-- and Sustainable Asset Management (sam) -- a Zurich-based asset management company. Called 'Changing Drivers: The Impact of Climate Change on Competitiveness and Value Creation in the Automotive Industry', the report is mainly based on the companies' performance in the us, European Union (eu) and Japan, which account for 70 per cent of the current global sales. The corporations assessed are: bmw Group, Daimler- Chrysler (dc), Ford Motor Company, General Motors Corporation (gm), Honda Motor Company, Nissan Motor Company, psa Peugeot Citron, Renault, Toyota and the Volkswagen Group (vw).

To gauge their future competitiveness, two types of analysis were conducted. In the first one -- the value exposure assessment -- the researchers examined the risks: costs the companies would incur to make their present cars fuel efficient, as well as to develop/adapt new technologies like the hybrid. During the second analysis -- the management quality assessment -- the researchers assessed the opportunities: whether a company was ready to enhance its competitiveness, by virtue of superior management and foresight to develop low-carbon technologies.

It was found that there is a marked difference in the way the companies can face the challenges. The difference was attributed to the following factors:

• Segment mix (for example, 49 per cent of dc's 2002 sales were light trucks compared to only three per cent of vw)

• Geographical distribution of sales (for instance, gm and Ford are dependent on sales in the us, while psa and Renault have captured the European markets. Companies operating in the eu will face more stringent standards, and hence their costs will be more).

A combination of the results of both the assessments showed that Toyota would emerge as the market leader in the near future, mainly due to its strong management. Renault and Nissan will also be positioned favourably due to their better-than-average management quality and lower-than-average expected costs to contain carbon emissions. Honda will face less risk due to the current high fuel efficiency of its vehicles, but its less-than-average management will offset its competitive edge. psa will suffer, as it has the weakest management strategy. gm and Ford will make the least profits due to bad management and low fuel efficiency of their cars at present.

To help investors, sam and wri combined the results of the value exposure and management quality assessments, and then translated them into forecasted ebit (earnings before interests and taxes) of the companies (see table: Think before you invest). According to the researchers, their ebit value would help people across the world to invest more wisely.