Reference guide on the national parks and sanctuaries in Maharashtra 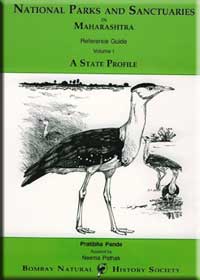 It's an alarming paradox: India boasts of 586 wildlife sanctuaries and national parks, but Indians in general are apathetic towards these protected areas (pas). While the national media, the country's urban elite and its scientific establishment wax eloquent on these reserves, very few spare a thought for those who rely on the pas for their biomass and livelihood needs. Lately, tourism and mining companies have begun viewing pa s as impediments to development. The government, of course, rarely allocates adequate funds to these reserves.

But how much do we really know about our national parks or sanctuaries? What happens to a piece of natural habitat -- forest, grassland, beach or wetland -- once it's declared a national park or a sanctuary? What do such declarations imply for people who rely on these reserves for subsistence? How effectively has India's pa network conserved biodiversity over the years? Questions such as these are rarely asked. In fact, most of our policies related to biodiversity conservation are made without even the most basic evaluation of the country's vast pa network.

In 1989, the Indian Institute of Public Administration, New Delhi, published a compendium on pas. This useful volume drew on questionnaire-based surveys. The two-volume publication under review uses a much more comprehensive approach. Based on several years of research, the volumes have incredible detail on each of Maharashtra's vast pa network (national parks and sanctuaries cover around 5 per cent of Maharashtra's area).

The volumes have enormous detail on each reserve's history and biodiversity and land-use patterns. There is also valuable information on people who depend on the pas and the resultant pressures on the reserve. Detailed maps indicate physical features, human habitations, forest cover as well as administrative details of each pa. The maps are the best part of the report and will surely prove useful for any scholar interested in analysing Maharashtra's pas.

And that is not all. All government documents related to management of pas have been tabulated and numbered for easy access. The importance of this compilation lies in the fact that such state-level information on national parks and sanctuaries, while sorely needed for effective planning, is extremely rare.

However, lack of analysis detracts from the volume's merits, particularly for a conservationist wanting to find out how effective India's vast pa network has been in long-term biodiversity protection. Such analysis could have drawn from simple tabulations of species extinctions reported from each pas, extent of representation of various taxonomic groups, proportion of endemic species protected, viability of large carnivore populations or change in forest area in a specified period. In fact, some of this data is hidden away in the volumes and can be ferreted out for serious analysis.

The volumes could also have done with some analysis of financial management of pas. It would have been interesting to know, for instance, the methods of financial allocation, revenue collection and expenditure. These processes are, after all, critical to the economic sustainability of both the pa network and also individual pas. They also offer us insight into the economic benefits -- or the lack of it -- that people living in the vicinity of a pa derive from the reserve .

Moreover, it is difficult to assess the management status of a pa without an analysis of its human resource requirements. For instance, per unit area computations of the number of functional check-posts, number of guards, extent of completion of legal process in each pa, proportion of claims for crop/livestock compensation that have been dealt with, types of scientific research undertaken and the number of research publications, can be useful indicators of a pa's management status. But this information has to be properly tabulated to serve this purpose.

Another weakness is the author's excessive reliance on state forest department records. For instance, official census figures are used to show patterns of decline in mammal population -- this despite the common knowledge that such figures are of doubtful veracity. Also, mere chronicling of 'management objectives' of every pa is not of much help to conservationists. Management plans are almost never made on the basis of scientific research and they are rarely put into effect.

The volumes could also have done with tighter editing. For instance, taxonomic listings that follow every chapter on a pa could have been condensed into just four tables (one for each wildlife circle). A single list of species with an adjacent column indicating their presence or absence would have been enough. Similarly, a pa -wise compilation of endangered species would have been useful to analyse the utility and scope of the network in conserving such species.


Notwithstanding these criticisms, the volumes are definitely effective in showing the degraded state of Maharashtra's pas. 17 of 41 of the reserves have an area of less than 100 sq km, and as many as 26 measure less than 200 sq km (seegraph: Fragmented pa s). There is a pa of 17 sq km and another of 12 sq km. Such tracts are unlikely to hold viable populations of most large vertebrates (and many invertebrates as well), and are likely to deteriorate into impoverished habitats sooner or later.

The maps in the volume show high edge-to-area ratios, fragmentation and tremendous pressure for biomass from surrounding habitations that afflict all pas.

Almost all have human residents within them whose biomass needs have yet to be catered to, or rights settled. And that is not the end of their problems. Livestock densities inside the reserves seem phenomenal, several times more than those of wild ungulates in many cases. Many of these pa s are in miserable legal tangle, due to lack of timely settlement of rights.

The volumes again show that experts -- both from the pure and social science disciplines -- must be consulted before the government plans to notify habitats as pas.


The two-volume report points to the need for going beyond simple information gathering. The data is now up for anaysis. We desperately need to know more on the pathetic state of the country's pa network, and this compendium on Maharashtra's national park and sanctuaries can prove a forerunner for the rest of the country. The author therefore must be commended for this mammoth effort in compiling information, though the volumes' overall organisation and analysis ould have been much better.