Radio waves can be effectively used to study underground structures 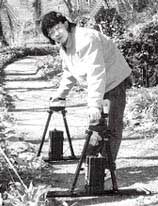 a ground penetrating radar (gpr) developed at the Natural Environment Research Council (nerc), Wiltshire, uk, is finding diverse applications in environmental sciences. The radar transmits radio waves to build up a picture of structures underground. These waves detect echoes in the ground with the help of a receiver antenna and produce map of the test area (nerc News , Autumn 1997).

nerc 's Geophysical Equipment Pool at the University of Edinburgh, uk , has acquired two gpr s -- the sensors and software pulse ekko 100 and 1,000 systems. The devices help ascertain changes in materials below the surface that produce characteristic reflections and provide valuable information about the structures.

When the pulse ekko 100 ground penetrating radar was used to find out hidden voids and sediment-filled fissures in an outcrop of limestone at Yealmpton, Devon, it successfully obtained their pictures. Researchers conducted studies of the outcrop along transacts at one-metre intervals, and at localities where sub-surface structures had been detected. The radar successfully discovered hidden caves. Earlier, merely a few caves had been detected at the surface. It proved that the gpr s are far successful than conventional techniques.

W ater is a strong reflector of radio waves. Researchers are hopeful that if water is displaced by contaminants then the gpr s may be useful for mapping distribution of contaminants such as oil underground.

The device showed positive results when a researcher named David Vaughan of the British Antarctic Survey used the pulse ekko 100 gpr system to investigate how snow was deposited in Antarctica and how it was deformed. He conducted a study to find out the behaviour of ice streams, those huge rivers of ice that drain most of the ice sheet.

Researchers at the Brahmaputra river in Bangladesh used the device to investigate the internal structure of a sandbar. They wanted to study one of the world's largest and most active sand-bed braided rivers. The sandbar that was studied by researchers, evolved downstream of a major fork in the river, and during two monsoon flood seasons built a mid-channel bar 2.5 km long, 0.5 km wide and 12 m high.

They surveyed nearly 8 km of gpr lines both down and across the emergent bar, in order to map its internal structure in three dimensions. The device helped them get good penetration and high resolution of deposited structures down to depths of 10 m to 15 m. Apart from helping understand bar growth in some of the biggest rivers, the technique could also enable researchers identify and study ancient alluvial deposits.