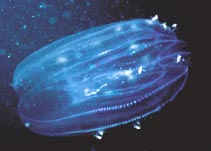 The Caspian Sea has been rapidly losing nutrients in the north of Iran due to uncontrolled growth in the number of comb jellyfish. But finally Iran seems to have found an antidote: Beroe ovata -- the jellyfish's own gelatinous cousin! Laboratory studies conducted by the Caspian Environmental Programme show that the presence of Beroe ovata in the Black Sea has decreased the comb jellyfish population in it since the former feeds on the latter.

Earlier, a sharp decrease in fisheries in a stretch of the Caspian Sea resulted in a meeting between the five Caspian states -- Iran, Russia, Azerbaijan, Turkmenistan and Kazakhstan. The problem was attributed to the comb jellyfish. Fisherfolk call it the 'monster' for it has annihilated stocks of kilka by gorging on minute plankton which is the latter's source of nourishment.

The jellyfish is a hermaphrodite, pre-adapted to rapid colonisation. It is widely believed that the organism was transported by ballast water taken aboard in the Black Sea and released when ships were passing through the Caspian Sea in 2000. Such marine aliens are a major menace to waterbodies (see: Decks cleared, partly; p44).