Kerala government presses for a nation-wide ban on the pesticide 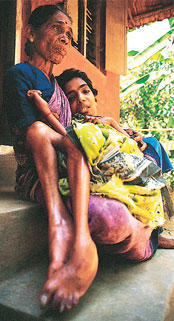 CHIEF minister of Kerala V S Achuthanandan on November 23 announced a relief package for the victims of endosulfan in Kasaragod district.

The package includes free ration, pension, a loan waiver, housing and drinking water supply, rehabilitation, training and employment for the 2,210 victims of endosulfan exposure. At a high-level meeting with officials from different ministries, activists and doctors, Achuthanandan said an all-party delegation would meet prime minister Manmohan Singh to press for a nationwide ban on the pesticide, already banned in 73 countries.

Analysts say the state government’s move has come as a damage control exercise after a remark by Union minister of state for agriculture K V Thomas on October 16. Speaking at a seminar, Thomas had said there is no evidence to prove the toxic effects of the pesticide on humans. He retracted his remark following protests by endosulfan victims from Kasaragod and activists and criticism by politicians across parties. He said it was the view of the Centre and not his own.

Just three days after Thomas retracted his remarks, the state pollution control board (SPCB) notified a state-wide ban of the pesticide under the water pollution act of 1974 and air pollution act of 1981. It said the ban is in view of the apprehensions of the people that aerial spraying of endosulfan on the cashew plantations of Kasaragod had led to health problems. Any violation would result in up to six years of imprisonment and fine. The notification indicates that the ban order by the Kerala high court in 2002 was not taken seriously till now, said C R Neelakandan, environmental activist in Kochi. “Now with penalties, things should improve.”

The Kerala high court has, meanwhile, called for an exhaustive inquiry into the sale of endosulfan in Kerala even though it is banned in the state. Since the pesticide often gets smuggled into the state for use in plantations, a group of political leaders and secretaries from Kerala recently met Union environment minister Jairam Ramesh to push for a blanket ban. The minister said a country-wide ban on endosulfan can be imposed only after consulting all concerned departments and other states. He assured a representative from Kerala would be included in the central team appointed by his ministry to study the environmental hazards of endosulfan.

The committee is separate from the two committees appointed by the Union agriculture ministry and the Indian Council for Medical Research (ICMR) to study the environmental and health impacts of endosulfan. Based on the committees’ reports, the Union government will decide whether to ban the persistent organic pollutant.

The agriculture ministry-appointed committee, headed by C D Mayee, the chairperson of Agricultural Scientists Recruitment Board, has already come under criticism. Mayee had chaired a similar committee in 2004 that gave a clean chit to the pesticide. Kerala has demanded that Mayee be withdrawn from the committee.

V N Katoch, director general of ICMR, said his committee is working on a framework to decide the kind of study they would conduct in the affected villages in Kerala. But activists question the need for a new study when the National Institute of Occupational Health (NIOH), under ICMR, has conducted one in 2002 and indicted endosulfan. “That is an old study. We would like to start afresh,” Katoch said.

“Committees are just a tactic to delay the ban,” said R Sridhar of Thanal, a non-profit working with endosulfan victims in Kerala. “Most of these committees rarely visit the affected villages. It is time Jairam Ramesh visited affected villages and took a stand.”