Remains of 138 Indigenous people from the Torres Strait Islands in Australia will be repatriated from London’s Natural History Museum. 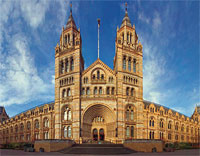 British explorers collected them during 19th century. “They are somebody’s ancestors, but they are also a source of great knowledge,” says the museum’s director of science, Richard Lane.

“By understanding the needs of the Islanders and by opening our eyes to their history we move towards greater cooperation with the Aboriginal people.” Ned David, a community leader from the islands, says he is “deeply touched” by the museum’s decision, which followed a long campaign by the Aboriginal leaders.