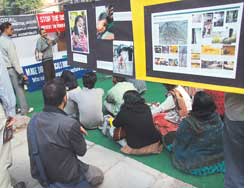 It was a chilly December afternoon and by evening it had turned quite cold But the weather did not deter the 100-odd people who had gathered near Delhi's Jantar Mantar to mark the 24th anniversary of the Bhopal gas disaster. This was one of 67 locations in 15 states where people gathered to mark their solidarity with gas disaster victims.

The people sang, recited poetry and recounted stories about the gas tragedy. There were activists like S A Khan and public health workers like Mira Shiva. There was also the five member band, Ekam Satyam. It packed in an energetic performance. Shalini Sharma of the International Campaign for Justice in Bhopal said that in Bhopal at least 1,000 people had marched with torches and held a candlelight vigil at a memorial statue opposite the now abandoned Union Carbide factory.