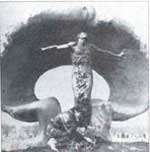 AOTHER disaster in Chernobyl could well be in the making, warn Western and Russian scientists. A report funded by the European Commission, and flashed by The Observer, a UK daily, says that the pillars supporting the reactor building and the 2,000-tonne roof are in danger of collapsing. This could send up a giant plume of radioactive dust.

Fearing atmospheric contamination over Europe, the West is anxious to shut down the Ukraine-based plant immediately. But Ukraine has refused to oblige, unless it gets adequate financial aid and expertise to build a safer alternative.

Meanwhile, the World Health Organization says that since the 1986 accident, there has been a 100-fold increase in thyroid cancer in children in the Chernobyl -affected regions of Belarus and the Ukraine.