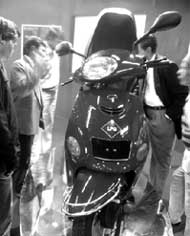 after several years of discussions the Union ministry of road transport and highways finally notified the amendment to the Central Motor Vehicle rules for use of Liquified Petroleum Gas (lpg) for vehicles on April 24, 2001. The rules now allow lpg to be used as vehicular fuel.

Once lpg is allowed to be used as fuel for vehicles, a number of vehicles waiting in the wings could take the market by storm. Waiting in the wings are tvs Suzuki and the Kinetic scooters, which use replaceable cylinders, Ford's lpg version of Ikon, Daewoo's lpg version of Matiz, and Fiat India with an lpg prototype. Several other smaller companies have mushroomed either to undertake conversions, or manufacturing of various components of the lpg conversion kits such as cylinders. Dessma Engineering, a Hyderabad-based company has got the approval from the chief controller of explosives to manufacture auto- lpg cylinders as per isi standards. The company is also importing lpg conversion kits from Zavoli in Italy. Yet another company called shv Energy South East is working closely with the Andhra Pradesh transport corporation to convert its diesel buses to run on lpg .

The most crucial is the entry of lpg two-wheelers as these promise to be one of the most important combatants of high levels of hydrocarbon and carbon monoxide emissions in Indian cities. According to an estimate of the Indian Institute of Petroleum, Dehradun, two-wheelers use up to 60 per cent of the country's petrol, and emit 65 per cent of total hydrocarbons and about 45 per cent of the total carbon monoxide from vehicular sources in the country. Of even greater concern is the predominance of two-stroke two-wheelers with extremely high levels of unburnt hydrocarbon emissions -- as much as 15-25 per cent, because of its inefficient design. Such a vehicle running on benzene and aromatic-rich petrol means high level of carcinogenic benzene in all our cities. It is only in Delhi that the benzene content in petrol has been reduced to one per cent, but in the rest of the country it varies from 3-5 per cent.
But there remains a question of technology. The current rules give sanction only to vehicles useing cylinders that have to be refueled. But a few Indian companies have a ready protoype of two-wheeles and three-wheelers that use replaceable cylinders. The cylinders, once emptied, need not be refueled. Instead the entire cylinder is replaced by a filled one. The manufacturers argue that the technology is safe but government agencies have refused permission for the use of the technology. The chief controller abrogates his responsibilty and says the the Union ministry for petroleum and natural gas (mpng) is responsible for giving the clearance. He says, "It is not for me to decide, the mpng has not given clearance for replaceable cylinders. My office is not in picture." On the other hand, industry sources say, the Union minister for petroleum and natural gas, Ram Naik has met the companies pushing for the clean technology but has refused to budge, passing the buck back to the chief controller.

The permission for use of the technology has been long pending. An automobile industry insider, wishing to remain anonymous, says, "The government, under pressure from vested interests, has placed unnecessary hurdles in the way of tvs, the company manufacturing lpg scooters, from using lpg for road testing its lpg scooters. They have the prototype ready, have got it successfully tested at Automotive Research Association of India (arai), Pune, in presence of the representative of the chief controller of explosives. Yet, the permission is not coming through. There is an attempt to protect the monopoly of liquid fuel-selling oil companies. "

The whole project had earlier got embroiled in controversy due to objections raised by certification agencies like arai with respect to its safety. Only when Chennai government showed interest in introducing clean fuels in the city and chanced upon the legal snag holding up introduction of lpg scooters the Chennai state pollution control board took up the matter with arai . This finally pushed the government of India to clear pilot road trials of 200 lpg scooters in Bangalore and Chennai. Now the road testing of the vehicles is held up because of the chief controller's permission.

The same story is evident in the case of Shri Shakti, a private company based in Hyderabad which has been trying to get clearance for the use of replaceable cylinders in three-wheelers but has suffered a similar fate.


tvs Suzuki Limited was one of the first companies to lead the lpg pack by showcasing its bifuel scooter at the Auto Expo 2000, held in New Delhi. The Spectra is a 150 cc four-stroke scooter run on lpg . tvs Suzuki has used a 1.5 kg lpg replaceable cylinder (equivalent to a 3.5 litre water capacity cylinder). The gas stored in the cylinder is taken through a service valve and excess flow valve to a lpg solenoid valve and then to a reducer. The gas then flows to the gas-air mixer and then to the engine. Simply turning a simple selector switch can do the changeover to petrol in case of need.

But Spectra has remained in the eye of the storm for a long time. tvs wanted to use replaceable cylinders to have a good outreach as otherwise demand for the lpg scooter will remain confined to areas close to lpg dispensing stations. Replaceable cylinders will give the consumers living far from dispensing stations greater flexibility for refuelling, says the company. The scooters could open niche markets in rural India as well as other parts of the country which the refuelling stations find uneconomical to service.

To cull all doubts about safety of using replaceable cylinders, tvs asked tno , a testing company based in The Netherlands to conduct tests. tno tested the scooter for several crash tests, bonfire tests and made a comparison of the risks of the lpg cylinder installed on the scooter as compared with a petrol scooter.

The tno report shows that the risk arising from unwanted fuel releases in the bifuel model of spectra are comparable to that from a petrol scooter. However, dedicated lpg -based scooters are safer. In all the crash tests conducted at The Netherlands no lpg leaks or fires were detected and the fuel cylinder could be removed and refitted easily. The relief valve used with the cylinder withstood the fire tests and it met the European standards. The pressure relieve device releases lpg in case of excessive build up of pressure inside the cylinder. The excess flow valve shuts off lpg flow in case of a pipe rupture. Other safety features used on the replaceable cylinder are the safety interlocks that do not allow gas to flow into the engine if the cylinder is not properly secured.

Based on these tests the company officials dismiss all doubts over safety of using replaceable cylinders. Says Satish Srinivasan, general manager (tools) at tvs -Suzuki, "We have decided to go with replaceable cylinders because the the scooter then can be used throughout the country unlike scooters with fixed cylinders which can be filled only where dispensing stations exist." tvs plans to make cylinders available at many points in each city and town with a parallel chain of bottling plants to refill the cylinders.
Market observers feel that lpg market is poised for success with the economics favouring lpg over other fuels. Though dismantling of subsidies on lpg is on the cards, lpg prices are predicted to remain lower than petrol prices. Ambrish Mishra at ibp Co Limited, says, " lpg will be available at Rs 18-20 per kg."

lpg supply for vehicular use is not likely to be a problem. Sixty per cent of the lpg is domestically produced and the rest is to be imported. The Khandla-Loni pipeline transports 70 per cent of the lpg in the country. The rest is shipped using rail tankers, road tankers and ships. Private players like Pyromet Technology Ltd. are also waiting to import lpg and set up dispensing stations in southern states.

Public and private companies are already in the fray of setting up lpg dispensing stations. Bharat Petroleum Corporation Limited (bpcl) has already set up a dispensing station in Delhi. Larson and Toubro Auto lpg Dispensing Systems have installed two others in Mumbai.

According to P D Khedekar of Larson and Toubro, Ram Naik has already announced the setting up of over 200 of auto- lpg d ispensing stations up all over India over a period of one year. "We have orders to set up stations in Delhi, Mumbai, Kolkata, Chennai, Bangalore, Thiruvananthapuram, Kochi and Ahmedabad," says Khedekar.

Using lpg can help to improve the air quality in Indian cities as evident from the emissions results of lpg scooters from arai (see graph: Better option). But emissions standards are still inadequate to get the best out of the process as it only requires to meet emissions standards equivalent of those for petrol and diesel vehicles in force at the time of manufacture. It ignores that gaseous fuels are inherently cleaner and can meet more stringent standards and drive the technology to get the best out of the process. Will the government act to protect public health and permit better technology to run on Indian roads, is the million dollar question.