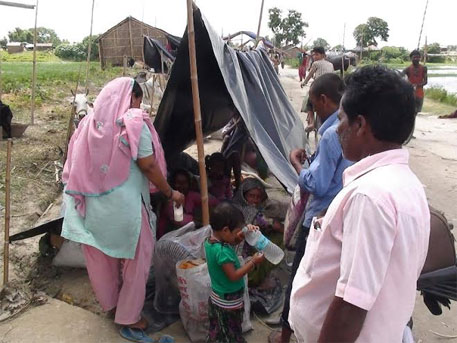 Mohammad Abbas Ansari and his wife Anooba from Ghibis village in Bhuran panchayat in Supaul are arguing with a government officer on the Kosi embankment. The family is arguing that there is no food for “insiders” and “outsiders” have occupied everything. People who reside within the embankment are referred to are insiders and are meted hostile treatment by those outside the embankment.

Kayub Ansari, also a resident from the same village, supports Ansari and his wife. The “insider-outsider” debate intensifies. Angry village residents claim that every time there is flood in the Kosi, families residing inside the embankment get nothing.

“Those living outside the embankment occupy every inch of relief camps and also establish a stronghold on food and water,” Ansari claims.

The recent flood threat because of landslide at Sinhdupalchowk district in Nepal has again underscored this rift.

There are around 250,000 people who live in extremely hazardous conditions inside the embankment. Government considers them “encroachers”. 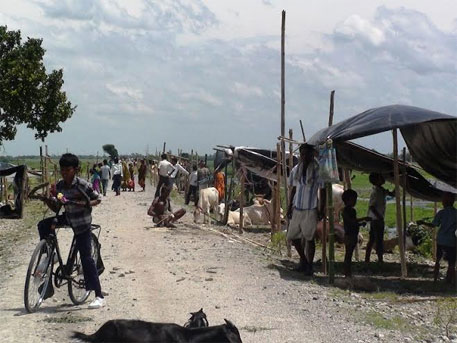 Every time there is flood or flood threat, the people are either forcibly evacuated or they hop on boat with their household goods to live in temporary shelter on the embankment. “It takes us a long time to reach the relief camps. Moreover, thieves raid our house during flood,” they complain.

The Ansari family not the only one waiting for relief food. Barely few feet away, two children of Geeta Devi are also waiting for the first morsel of the day. They were forcibly evacuated by security forces on Sunday night.

This time again insiders have failed to find space in relief camps.

The insider versus outsider problem flares up every year during floods. The government of India, during construction of Kosi dam and embankment in 1955, had assured residents of 304 villages that they would be provided land and rehabilitated. 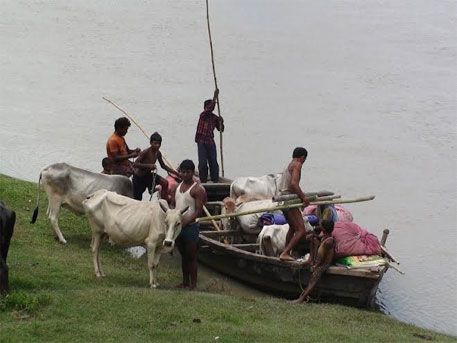 After a series of agitations in 1957, around 152,000 villagers were provided residential land. But the government made it clear that it could not provide agricultural land to these people. 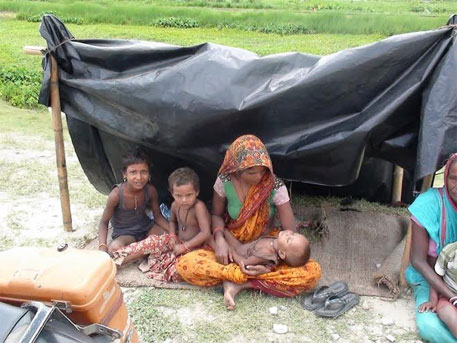 Government had constituted a series of committees to chalk out a solution for families living inside the embankment. There is also a defunct department—Kosi Pirit Pradhikar—in Supaul, but it does not have any powers. It can only request the other departments to take action.

According to Chandraskher Singh, a resident from Mahisi village in Supaul, construction of embankment created large scale unemployment in the region. Youths started to migrate to states like Punjab.

The embankment has drawn a line of enmity between the Kosi residents. “When embankment at Kusaha breached in the 2008 floods, insiders celebrated that the outsiders will now feel the pain of floods,” Singh says. 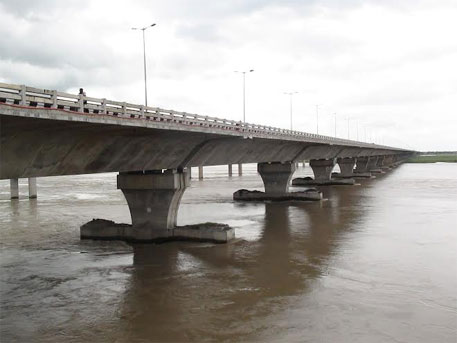 The insiders that are backbone of farming in Kosi are today hungry. Ansari’s children wail and they jostle and fight for their share of food from outsiders. Arrival of a relief boat gives them hope of getting food.

Unfortunately, the boat is carrying only polythene sheets.