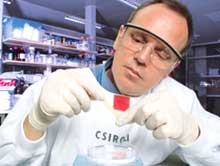 australian scientists have developed a biomaterial more resilient than rubber. Its constituent molecules are naturally found in many insects, such as the fruitfly and flea. The new substance -- called synthetic resilin -- can have several industrial and biomedical applications, including the making of more robust spinal implants.

Resilin, a protein, helps wingless fleas store huge amount of elastic energy for jumping and assists flying insects in flexing their wings -- thousands of times per minute -- without causing damage to the tissue connecting the wings to the body.

To develop the biomaterial, the scientists led by Christopher Elvin of csiro Livestock Industries in St Lucia, isolated a portion of the resilin gene from the fruitfly (Drosophila melanogaster), and inserted it into Escherichia coli bacteria. A brew of the microbes generated several grammes of the protein pro-resilin, a precursor to resilin. The researchers then mixed pro-resilin with a catalyst in the presence of light. After just 20 seconds, the liquid mixture turned into a rubbery solid that behaved exactly like resilin, the scientists reported in Nature (Vol 437, No 7061, October 13, 2005) .

The resilin molecules in a fruitfly's wings might have to stretch about 500 million times during its lifetime. Scientists estimate that humans have to flex their back almost as many times. A material with extraordinary durability, such as synthetic resilin, could significantly improve artificial spinal discs, which are made of metal and polythene, they add.