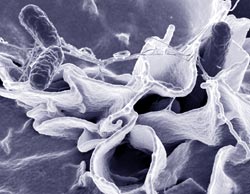 the typhoid bacterium has become resistant to antibiotics, shows a two-year-long study by researchers from the All India Institute of Medical Sciences (aiims), New Delhi. The main reason behind the phenomenon is indiscriminate use of antibiotics. For example, ciprofloxacin, the drug presently being used widely to fight typhoid, is also a treatment for fevers, tuberculosis and even livestock diseases. As a result, the typhoid bacterium, Salmonella typhi, has developed resistance against it. In 1989, it was found that the bacterium had become resistant to chloromycetin -- a drug used for around 25 years.

The findings of the study are alarming, as the incidences of typhoid are very high. For instance, a 1999 study of a 'low income community' in Delhi showed that the incidence of typhoid fever was 27.3 per 1,000 person years (number of people multiplied by number of study years) in children under five years of age, 11.7 for kids 5-19 years old and 1.1 for those who are 19-40 years old.

The aiims researchers selected 60 typhoid-positive patients and isolated the bacteria from their blood. The bacteria were then cultured in the laboratory and tested for their 'sensitivity' to around 10 commonly used antibiotics. Though all the cultured bacteria were found to be sensitive to ciprofloxacin in vitro, the drug failed to work among patients.

Such increased resistance means that expensive drugs would have to be used for treating typhoid, says Anoop Misra, the lead author of the study. While per day treatment involving ciprofloxacin is just Rs 20, new drugs such as ceftrioxone cost as much as Rs 350 per day. Ceftrioxone has another drawback -- it can be given only through injections. Moreover, in many parts of the world, S typhi has become resistant to even this drug. "Maybe we would be forced to use a combination of two or three antibiotics in the near future," the researchers assert.

According to Naveet Wig, associate professor, department of medicine, aiims, the best way out is to have guidelines to ensure rational use of antibiotics for specific diseases. For example, antibiotics could be used on a rotational basis. Even older drugs can be utilised under this system, as bacteria that had become resistant to older antibiotics are now once again becoming sensitive to them because they were not used for a long. Studies, however, need to be conducted to show that older drugs are effective. "There are good signs, but they may be of no use as there is no effort towards formulating a rational drug policy," concludes Misra.