Two recent studies claim that spinal tissue can be repaired 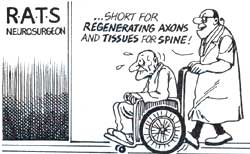 PEOPLE paralysed because of spinal injuries need not give up hope. Two independent studies reported in the British journal Nature (Vol 367, No 6459) show that damaged nerve tissue can be repaired, at least partly.

In one study, scientists from Kyoto University in Japan used rat foetal tissue transplants to restore normal movement in new-born rats whose spinal cords had been severed. Another group at the University of Zurich and the Max-Planck-Institute for Psychiatry in Munich found two biochemicals that could help regenerate spinal nerve cells.

In damaged spinal cords, nerve networks that are responsible for movement often remain intact but their connection with the brain is broken. The challenge in spinal cord regeneration research is to stimulate the long extensions of nerve cells, called axons, to grow and re-establish connections with the brain.

Though nerve cells do possess an inherent ability to regenerate, they are unable to penetrate into mature brain and spinal cord tissues. Scientists believe the interaction between the body's growth-inhibiting and growth-stimulating factors is responsible for this.

The European team has targeted this internal tug-of-war. They injected at the site of the injury biochemicals that neutralise the effects of inhibitory proteins and z enhance the sprouting of dam- z aged axons. The scientists found that in the successful cases, some 5 to 10 per cent of the spinal nerve fibres regenerated and grew up to 20 mm.

The Japanese scientists excised 1.5-2 rum pieces of the lower spinal cord of 2-day-old rats and replaced them with pieces of foetal spinal cord. The successful tissue transplants fused to form a seamless spinal cord. Yusushi Iwashita and the other scientists at Kyoto University report that the regenerated nerves were able to function normally and the rats were not only able to walk, they were also able to run, climb and even land on their feet when dropped upside down.