Return of the tube

Announcing the second coming of vacuum tubes, which were wiped out by transistors and integrated circuits 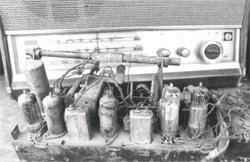 vacuum tubes, the kind one saw in old radio sets and televisions, were the backbone of the electronics industry till the 1960s. However, due to their large sizes, excessive heat generation and lack of integration with other electronic components, they lost the battle to solid state devices like transistors and integrated circuits. A group of researchers has come upon a novel way to make vacuum tubes that might bring about a revival of these quaint devices, at least for some applications. The tubes are quite unlike the ones that are known -- so small that ten billion of them can be placed on an area of one cm sq.

A vacuum tube works on the principle of thermionic emission. When a negative electrode is heated, it gives out electrons. These electrons move from the negative electrode to the positive electrode inside a glass tube that is evacuated. A device working on the same theory, called a diode, formed the basis of several applications of vacuum tubes. Diodes function as one-way switches, they allow current to pass only in one direction.

A more useful kind of tube had three electrodes, and was called a triode. The presence of the third electrode allowed one to control the amount of current passing between the positive and the negative electrode. In fact, till the advent of transistors, which are also three-electrode devices, triodes were used extensively, even in the first electronic computer, the eniac . But the invention of transistors saw the end of tube technology. Transistors were smaller, faster and more reliable.

Nevertheless, vacuum tubes had several advantages. They can carry a much larger current and they function even when the temperature is varied. They are also resistant to radiation, which makes them useful for several critical applications. These advantages have been used by engineers in devices such as high-fidelity audio amplifiers. Now, Alexander Driskill-Smith and colleagues at the University of Cambridge, uk , have come out with a miniature vacuum tube that may replace conventional transistors ( Applied Physics Letters , Vol 75, pp 2845).

The 'nanotriode' tube is smaller than 100 nanometres (a nanonometre is one millionth of a millimetre). The researchers started by creating a five-layered sandwich of tungsten and silicon dioxide alternately. Tungsten works as the metal, while silicon dioxide insulates the metallic layers from each other. They then made a cavity inside this sandwich by using a high-energy ion beam. The middle layer of tungsten was left jutting into the cavity, while the bottom layer was deposited with tiny pillars of a gold-palladium alloy. The cavity was then sealed with a layer of titanium.

When current is passed through the pillars, electrons are emitted and are pulled towards the top tungsten electrode. Applying a voltage to the middle electrode can control the current passing through the "tube". The beam of electrons from the tube is highly focussed and can be used for applications like holography or etching integrated circuits (nanolithography).

There are many potential applications of vacuum tubes -- flat-screen colour televisions, for one. Today's television screens are basically tubes, though they are cathode ray tubes ( crt s). They are like vacuum diodes, except that the electrons are pulled towards the positive terminal so fast that they fly straight past and strike phosphor dots on the screen, which emit coloured light in response. Researchers are now seeking to miniaturise this arrangement so that tiny vacuum diodes, less than a thousandth of a millimetre high, fire electrons at phosphors stationed immediately above them.

Though the Cambridge group has created a prototype of the nanotubes, there are several hurdles. A major one is the high voltage required for their operation. This effectively rules out large-scale integration of these tubes. Another major problem is reproducibility of the tubes with the required performance. Nevertheless, there is a possibility that the tube technology will be preferred over conventional electronics for some niche applications.