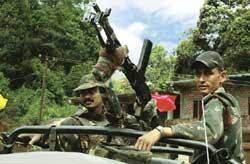 the Justice B P Jeevan Reddy Report reviewing the Armed Forces (Special Powers) Act (afspa), 1958, has recommended repealing the act. But, it has also said that parts of the act be included in the Unlawful Activities (Prevention) Act (ulp), 1967, which is applicable across the country. The five-member committee set up in November 2004 submitted its report in 2005 and recommended that the act be scrapped. The Union government refused to share its contents with the public, and since then has kept a decision pending. In October, this year the report was leaked out to the media.

The report claims that afspa is "too sketchy, too bald and quite inadequate in several particulars". Yet, it reccommends that effective portions could find place in other legislation.This, the report claims would "erase the feeling of discrimination and alienation among the people of the north-eastern states that they have been subjected to, what they call, 'draconian' enactment made especially for them. The ulp Act applies to entire India including to the north-eastern States. The complaint of discrimination would then no longer be valid."

However, some constitutional and human right lawyers contend that if afspa -like regulations were incorporated into pan-Indian legislation it would give the state the opportunity to use the same draconian powers in other areas of armed conflict, say, the Naxal-affected districts of India. K Balagopal, a Hyderabad-based rights lawyer fighting an ongoing case in the Andhra Pradesh High Court on similar issues, said in a meeting in Delhi, "One must be aware that if India follows the report, it shall allow the Union government to send armed forces under its direct control to other disturbed areas in India too."

The media has reported that the Union government is trying to bring in legislative changes to this effect by the winter session of Parliament, but details remain unknown.