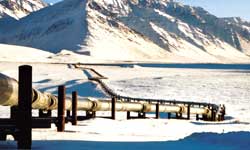 The us government wants to open more public land to oil and natural gas production. The interior department has quit conducting environmental reviews and seeking comments from local residents every time drilling companies propose new wells. Officials have been directed to issue permits based on past studies of a project, even though they may be outdated.

The government authorised this as part of an energy bill made into a law in August. This energy bill created a new "categorical exclusion" under the 1970 National Environmental Policy Act which allows new oil, gas and geo-thermal wells without first conducting environmental studies or soliciting public comment on them. Though laws to protect endangered species, air and water quality and cultural artifacts are still to be followed.