The state's attempts to stop environmental degradation in Bariadi district failed because they ignored the traditional knowledge of the people. 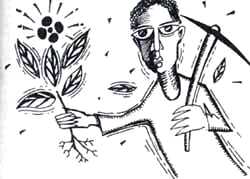 A STUDY has shown community institutions can be an effective way to regulate the use of natural resources. The indigenous knowledge, attitudes and practices of a people have great potential in promoting the management of resources around them. The study by Wendelin Mlenge, project manager for the HASHI project in Shinyanga district of Tanzania, and Lars Johansson of Swedforest International, was presented at the SAREC workshop in Stockholm in October. It suggested the traditional regulatory institutions should be revived and the indigenous practices of a people should be studied with a holistic, action-research approach rather than by conventional methods.

The study was conducted in July 1992 in Bariadi district of Tanzania, where efforts to curb environmental degradation that has occurred over the years has failed mainly due to flawed approaches adopted by the government and aid agencies trying to use conventional development models. Bariadi is situated in the Shinyanga region, an area that is still ethnically homogeneous and dominated by agro-pastoral cattle-keeping, subsistence agriculture of various food crops and cotton cultivation.

Over the past six decades, extensive land use and over-grazing by cattle have led to severe soil erosion. In a bid to check the degradation, the government implemented measures such as destocking, compulsory soil conservation and tree planting. These and the land management methods and the enforced villagisation in 1974 -- under which the government forcibly grouped semi-nomadic communities -- failed and some areas have turned into semi-deserts. Mlenge and Johansson find the main cause of failure was because the indigenous knowledge, attitudes and practices of the people living in the region were ignored.

The introduction of villagisation among a people who exploited land and moved on was based on generalised notions of development. It led to systematic depreciation of indigenous knowledge and the disruption of the customary land-use system that utilised enclosures to manage natural regeneration and enhance security in subsistence.

In July, 1992, a team of researchers recruited from among the local people started studying their indigenous knowledge and practices in relation to environmental degradation and plants. The members of the team were all born in the study area and were well known by the villagers. The insiders were used so that information could be elicited in a non-extractive manner.

The research team learnt how knowledge on plants, soil and ecology is learnt, shared and imparted within the community. They found that sustainable livelihoods could be promoted through the recognition of indigenous practices and the empowerment of local social and political institutions -- aspects that previous research apparently overlooked.

But what surprised them was the "sophistication" of governance of this village community. These institutions survived not because of the modern Tanzanian state but in spite of it.

One such institution is the dagashida, a men-only community assembly that meets once or twice a year to formulate customary laws and to settle unresolved issues from smaller dagashida. Small dagashida, called lugoye, are held frequently at village and hamlet level to settle minor disputes, and very large dagashida are called -- bringing together several thousand men -- to plan and rehearse military action to counter cattle-raiding and murders.

Dagashida originated as a political institution to balance the power of the temi (king). But the colonial state and later the independent government of Tanzania allied only with one power structure -- the chiefs -- much like the situation in India. With the emergence of state governance and statutory law, the authority of the dagashida diminished. But the institution survived because it retained power in two areas the state did not control: regulating occult and cultural nature of the people and in organising military defence against cattle raiding. Mlenge and Johansson, in a clear indictment of modern knowledge, say, "We do not know how widespread the dagashida is even today." During his six years as a manager of a community forestry programme, Mlenge had never heard of the institution.

A dagashida can sometimes gather several thousand men. There are strict rules that govern the proceedings, and even latecomers are fined. Once the agenda is announced, the men do not address the gathering but one by one engage in a dialogue with another person who relays the message to another so that all hear it. the aim is to build a consensus, and the procedure would rival the most democratic and transparent parliament in the "civilised" world. Violations of rules are punished with fines, and failure to pay up results in excommunication from the neighbourhood. For instance, if the fine is an animal, it would be immediately slaughtered and shared by the participants. Songs are often used to record and spread the decisions of these village parliaments.


At the suggestion of a school teacher -- part of the team -- who advocated the dagashida as the best way to manage community control over resources, sessions were held in three villages during the research team's period of field work. The team asked for all the dagashida to be held on environmental matters and also for women to participate because they had to be involved in resource management issues. The women have a separate institution (pumburu) to resolve their problems. Initially, the elders opposed the idea of women participating, but eventually it was decided that they would be allowed.

The first dagashida was conducted in a neighbourhood. The second was in Nguliati village where the sessions were conducted regularly after villagisation, and the third in a village where a dagashida had not been held for 18 years. Of eight issues that surfaced at all the dagashida, four were discussed at all three villages and the decisions taken on them were almost identical. The common decisions at the dagashida were first that the district authorities should stop regulating access to natural resources and let the institution take over. In Tanzania, like India, the bureaucracy is the biggest landlord. The dagashida emphasised, for instance, that the district natural resource officer must stop issuing permits for charcoal makers to cut trees. Secondly, encroachment on customary cattle tracks should be stopped so that grazing on cultivated land was avoided. Thirdly, the women stressed, post-harvest grazing should be regulated to allow the growth of important subsistence crops such as groundnut and pumpkin. Fourthly, farmers should have the right to disallow felling trees on farm and forest land.

Other decisions taken were that the dagashida should disallow the felling of specified trees that bear fruit or are considered scared; ensure that people collaborate in the digging and maintaining of wells, as was the case prior to villagisation; restrict uncontrolled bush fires; and commission further studies on indigenous culture.

Although the revival of dagashida created some resentment among village leaders, and in one village a power struggle, the news of the dagashida spread like wild fire. Local schools have started teaching about it and new songs are being written. But, say the researchers, "we do not know where this will lead to."

If the district authorities accept the recommendations of the dagashida under the government's plan to grant land titles to villages, the institution could arbitrate in land disputes. But local vested interests could well make sure this never happens. Already, village leaders and petty politicians resent their stronghold being attacked. Mlenge and Johansson point to another danger: The district administration could use the revived dagashida as a tool to push their own programmes. If this happens, then very much like in India, the dagashida will participate in the government's programme and not the other way around.