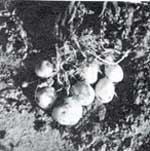 AS SOON as the civil war in Rwanda comes to an end, the United Nations plans to plant 40,000 ha there with potatoes to compensate for the loss of potato tubers -- the underground part of the plant that is traditionally used as planting material -- which have been consumed by a starving population. A few years ago, this would have been a mammoth task, needing 80,000 tonnes of potato tubers to be transported to the seeding ground, but today only a bagful of "true potato seeds" (TPS), weighing 40 kg, would suffice.

TPS are obtained from potato flowers, unlike the conventional tubers which are essentially potatoes with 'eyes' that sprout into a plant. TPS were developed by Mahesh Upadhya, a scientist with the International Potato Centre's regional research programme in New Delhi and scientists from the Shimla-based Central Potato Research Institute. About 2 tonnes of tubers, normally required for a 1-ha field, can be replaced by a few grams of TPS. The UN will now save $16 million on 80,000 tonnes of tubers that would have had to be taken to Rwanda. The TPS will now be airlifted to Rwanda from a potato seed breeding farm in Agartala in Tripura.

Upadhya's TPS are also ideally suited for cultivation in the subtropical climate. According to Hubert Zandstra, director-general of the International Potato Centre based in Lima, Peru, the potato varieties developed in India mark the culmination of a 25-year-old quest for potatoes that would thrive in warm climates.

The hybrids combine the characteristics of Indian and Peruvian potato varieties. The hybrids are extremely rustic, in that they can survive in regions where other potatoes fail.

Upadhya claims that these hybrids are highly resistant to late blight, the main fungal disease afflicting potato crops in India. While the potato varieties being cultivated in the country -- essentially imported European varieties that are not well-suited to conditions here -- need between 6 and 10 pesticide sprays, a single preventive spray of a fungicide is enough for the new varieties. Upadhya says that feedback from farmers who have used his potato seeds reveals that TPS requires less fertiliser than traditional varieties.

According to the International Potato Centre, one variety of the hybrid seeds was released earlier in India and its acceptance has been particularly encouraging. During the 1993-94 potato season, some 1,600 ha were cultivated with the new variety, a 10-fold increase over the previous season. The Indian Council for Agricultural Research plans to release more hybrid seed varieties soon. Experts reckon that by 1995 the hybrids will be planted on 25,000 ha.

Upadhya is confident that with the new TPS varieties, production could double, with yields going up from 10 to 20 tonnes per ha. He projects that these varieties could yield as much as 25 tonnes per ha, close to the US's average yield.

While the government has plans to establish 3 TPS production centres, farmers are at present facing an acute shortage of seeds and are apparently willing to pay a premium for them. According to Zandstra, "Nowhere is the potential for TPS technology greater than in India." The country produces some 16 million tonnes of potatoes, and the figure could reach 30 million by the end of the century. He adds, "We believe that TPS will play a major role in achieving that goal."

In other parts of the world this technology is doing well. The Asian Development Bank recently invested $43,000 in a 3-year programme to bring TPS technology to the Phillipines, Sri Lanka and Vietnam. They have also been successful in areas usually considered inhospitable to the cultivation of potatoes, including Egypt, Cuba and Uganda.