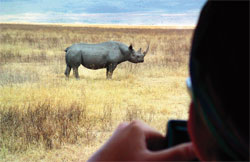 Apermit to hunt and kill an endangered black rhino in Namibia has been sold at a US auction for $350,000. The Dallas Safari Club in Texas, which organised the auction, says the hunt will help protect the species by removing an old, aggressive rhino and funding future conservation. However, the auction has been fiercely criticised by conservationists and has even drawn death threats.

Namibia is home to about a third of the world’s 5,000 black rhinos, and issues just three hunting permits a year. The winning bidder, who has not been named, will hunt an old, non-breeding male rhino. The auction organisers say such animals actually pose a threat to younger rhinos, which they sometimes charge at and kill.

All proceeds will be donated to the Namibian government and will be earmarked for conservation efforts, safari club officials said. Animal rights groups described the hunt’s conservation claim as “perverse” and “a sad joke”.

More than 80,000 people have signed online petitions against the auction.