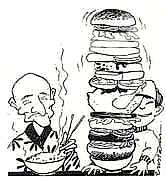 IN A SHIFT from Japan's traditional eating habits, meat and dairy products have now overshot rice production as the Japanese take to a more westernised diet. The Japanese ministry of agriculture, forestry and fisheries recently reported that as compared to 25 years ago, the average Japanese now eats 40 per cent less rice, but three times as much meat.

Another indication of the change is provided by figures showing the average Japanese consumed only 69.9 kg rice in 1991 as compared to 111.7 kg in 1965. The average meat consumption rose to 28.9 kg from 9.2 kg in the same period.

This trend is expected to continue as the younger generation prefers hamburgers and fried chicken over traditional Japanese rice preparations. In 1991, rice production in Japan' fell by 8.7 per cent to ,25,5 per cent share of the country's agricultural market, estimatedly worth 2.92 trillion yen (US $23.3 billion). The output of meat and dairy products, on the other hand, rose by 0, 7 per cent to 27 ;1 per cent of the market, worth 3.11 trillion yen ($24.8 billion), even though Japan had simultaneously opened up its markets to more meat imports.