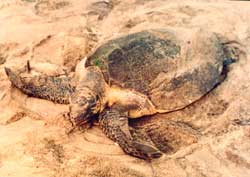 even as forest officials and environmentalists in Orissa heaved a sigh of relief with the news of the first batch of 3,000 Olive Ridley turtles crawling onto the beach near the Rishikulya river mouth, fishing trawlers are set to turn killer machines again. For though the use of turtle excluder devices (teds) has been made mandatory in the state, trawler operators continue to flout norms with impunity.

In fact, they made no bones about their outright contempt for the law at a recently held workshop in Bhubaneswar. What was meant to be a constructive brainstorming session, degenerated into a triangular war of words with the operators, authorities and activists freely trading charges. Its objective -- demonstrating the use of ted while motivating trawler operators to use the same -- was lost sight of amid the hostility. The meet was organised jointly by the state directorate of fisheries and Project Swarajya, an ngo (non-governmental organisation), in collaboration with the Wildlife Institute of India and undp's Sea Turtle Project. In one of the few positive developments, an indigenous ted model -- field-tested by the Central Institute of Fisheries Technology -- was displayed at the meeting.

Experts have long established that ted is the only known way to reduce turtle casualty. A turtle excluder device is a simple grid-like instrument made of steel, aluminium or iron. It has inter-spaced bars and a flap made of net attached to it, which allows the turtle to escape, while allowing fish to pass through between the bars into the bag of the trawl net (see Down To Earth, Vol 9, No 23, April 30, 2001). The non-usage of teds is turning the Gahirmatha beach in Orissa into the largest graveyard for turtles.

At the workshop, the Orissa Marine Fish Producers Association sought to dispel the notion that operators are the main culprits. Association president T K Patnaik claimed that their not using ted led to very few turtle deaths. In fact, he blamed industrial effluents, being discharged at different points on the Orissa coast, for causing turtle casualties. He alleged that since the industrial lobby was strong, the state government gave it preferential treatment.

Another jarring note was struck by trawler owners, who contended that teds would drastically reduce fish catch. They felt that it would plummet by almost 50 per cent, thereby adversely impacting the livelihood of nearly 1.5 lakh marine fisherfolk. Any imposition of the ted rule will set the fishing communities on the warpath, they warned. The owners also levelled charges against ngos and accused them of becoming mouthpieces of the pro-ted lobby.

But Biswajit Mohanty of Operation Kachhapa, a non-governmental project to save turtles, came up with a sharp retort: "To use teds is legally mandatory and by openly refusing to do so, trawler operators are blatantly violating the law." He slammed the government, too, for its "lackadaisical approach" to implement the ted proposal. "Even after five years of the promulgation of the law, the state government continues to dither instead of enforcing it because it is hand in glove with trawler operators," alleged Mohanty and substantiated his charge by stating that the authorities were yet to cancel a single trawler operator's licence.

Satyabrata Sahu, director fisheries, countered, "We have already seized 48 licences since February 6, 2002. A class II officer has even been suspended for dereliction of duty." He pointed out that the department was also taking measures to protect migrating turtles in spite of a manpower crunch. Sahu cited the example of the us where it took 10 years to implement a similar law.

The livelihood issue being raised by the trawler operators is definitely myopic because, according to Mohanty, if teds are not used, the us will clamp a ban on the import of shrimps from India for its failure to take turtle protection measures. Malaysia is already reeling under such a ban. The state exports fish worth Rs 380 crore out of which nearly 96 per cent can be attributed to shrimp shipments. Any such move would drastically affect the livelihood of fisherfolk.

teds have recently been in the news in Orissa. Acting on a petition, the Orissa High Court had asked the government to file a report on its alleged inefficiency in implementing ted laws. The Orissa finance minister placed a report in the state assembly in March 2002, which put the official death toll of Olive Ridley turtles since 1998-99 at 32,000.