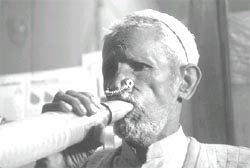 two new herbal drugs, Respicare and Asmon, have been launched in the market to treat bronchial asthma. However, difference of opinion prevails among the allopathic and Ayurvedic practitioners about the efficacy of the drugs. Bronchial asthma is caused by allergens and leads to difficulty in breathing. Around five million Indians suffer from asthma.

Though inhalers are effective in controlling the symptoms of asthma, they have side effects like brittleness of bones, hypertension, changes in the skin structure, diabetes and cataract. They can also cause yeast infection in the mouth and hoarseness of voice. On the other hand, herbal drugs do not have adverse side effects.

Similar claims have been made by the Indian Institute of Chemical Biology ( iicb ), Kolkata, which has developed the medicine Asmon, being manufactured by Herbochem Remedies (India) Private Limited. Asmon is effective, claim the manufacturers, in controlling bronchial asthma while Respicare's manufacturer says its herbal product can also help to deal with related problems like bronchitis (asthma caused due to viral or bacterial infections) and infections of the nose and throat.

Respicare has been made with herbs mentioned in Ayurvedic texts and the tablet is supposed to be effective in reducing respiratory problems caused due to pollution. The concoction consists of 11 herbs, most of which are commonly used by traditional practitioners. "Though viral or bacterial infections and pollen grains cause most of he respiratory problems, they are more commonly related to allergens such as cigarette smoke and exhaust fumes," points out S Kumar, vice president, projects, research and development at Bacfo.

To check the effectiveness of the tablet, clinical trials based on observation were carried out on 264 patients and the medicine's effectiveness was tested for six months. The patients were studied and the results were classified as those showing complete improvement, partial improvement and no improvement at all.

The tests showed that the use of steroids, inhalers and nebulisers was reduced by those using Respicare. "Though the preparation does not cure respiratory problems, it effectively controls the disease without showing the adverse effects caused by allopathic medicines," says Bhojraj Singh of the Ritnand Baldev Medical Foundation, Ayurvedic Clinical Centre.

Asmon, on the other hand, is made from plants that are not used in the Indian system of medicine to treat asthma. "While the plants used to prepare the tablet are mentioned in the Ayurvedic texts, they are not used for solving respiratory problems," says Samir Bhattacharya, director, iicb . The drug has been tested on guinea pigs by carrying out double blind studies and using control sets of animals. But tests on human beings have been carried out using the Ayurvedic method of observation only.

Under iicb 's direction, Ayurvedic practitioners tested the drug on 200 patients and it showed improvement in more than 80 per cent of the patients. During the eight weeks that the patients were kept under observation, it was seen that the number of times the patients had to use the inhaler was also reduced gradually. The optimum dosage as per the weight of the patient was also determined and the drug has not been found toxic even at two gm per kg weight.

Unlike in the case of Respicare, the chemical action of Amon is known. While allopathic drugs are usually used to control symptoms like breathlessness and generally act by dilating the bronchioles (small compartments in the lungs) or by reducing the infection, Asmon acts on the root causes responsible for asthma.

The drug inhibits the breakdown of Arachdonic acid, which reduces the production of leukotrines -- chemicals that cause asthma. No adverse or side effects have been observed in animals or the patients treated with the drug.
However, allopathic doctors doubt the efficacy of both the preparations. The main bone of contention seems to be the way the clinical trials have been carried out. S K Chhabra, consultant chest physician at the Vallabhbhai Patel Chest Institute, New Delhi, feels that the claims of efficacy are premature. The magical cure these herbal drug manufacturers say their drugs can ensure raise false hopes among the patients, he says. "If their product is really effective, why don't they carry out the clinical trials with controls and prove it," he adds. "Cost and willingness of patients is a limiting factor for conducting the clinical trials," defends Arun Chauhan, managing director of Bacfo Pharmaceuticals. "We are willing to carry out the trials for herbal drugs just like we do it for the allopathic drugs," says Chhabra .

J C Suri, senior chest physician, at the New Delhi-based Safdarjung Hospital, states that Asmon would be effective only in those cases of asthma that are induced by aspirin as they are the only ones where the Arachidonic acid pathway is operative.
"The number of patients affected by this particular kind of asthma is very small in India and drugs like Monteleukast and Zafirleukast needed to cure it are not available in the market," he says. He asserts that herbal drugs cannot replace steroids and can, at best, be used along with allopathic medicines.

Suri says, this makes herbal drugs useful in cases where the doctor does not want to increase the dosage of allopathic medicines.

According to K Sudha Asokan, director of Ayurveda Kendra, a treatment centre in Delhi, though clinical trials are necessary to confirm the efficacy of the drug, it is not possible for a treatment centre to carry out trials based on the double blind method. "Such trials can be carried out only in a research laboratory," she says. But even Asmon, which has been developed by a research lab, has reverted to the use of mere observations in the name of clinical trials.

On the other hand, Ayurvedic practitioners are more inclined to believe that Respicare would be effective as it consists of herbs, which have been talked about in the ancient texts. "The same herbs are effective against related problems like sore throat and bronchitis; a single drug can be used to control all the symptoms," says S K Mishra, former director of Central Council of Research in Ayurveda and Siddha and advisor to the Union ministry of health and family welfare.

He emphasises that since millions of people have already benefited from herbal drugs, it is not necessary to carry out clinical trials which the allopathic system demands and the method of observation should be sufficient to see whether the drug is effective or not.

As far as the cost factor goes, the minimum cost of treatment per month in case of Respicare is around Rs 168. Asmon costs Rs 390 per month. On the other hand common inhalers like Becalate and Foratec cost around Rs 140 and Rs 120 respectively per month. "So, the patient may end up paying more for drugs, whose efficacy has not been proved," says Chhabra .
Health Herbal Medicine Asthma Asthma India Drugs Ayurveda Infectious Diseases Research Development Development Delhi Science & Technology Print edition Print edition Special Report Special Report Air Pollution
Donate Now