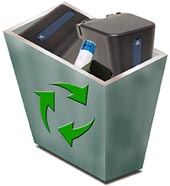 A plant in the Scottish Highlands, will be the first such in the uk to recycle lithium-ion batteries. These batteries are mainly used in mobile phones, camcorders and laptops. Less than 2 per cent of consumer disposable batteries are currently recycled, with the rest being disposed of in landfill sites.

The base, created at Golspie by aea Technology, was officially opened by Scottish Enterprise Minister, Jim Wallace. The Golspie plant aims to set a new world standard for battery recycling. Campaign group Friends of the Earth (foe) in Scotland commended the move, branding batteries "an environmental menace". According to foe Scotland's head of research Dan Barlow, approximately 680 million batteries are dumped every year. "While this plant will deal with lithium-ion batteries only, its opening certainly represents a major step in the right direction for dealing responsibly with everyday waste," said Barlow.