Atmospheric levels of methane have stabilised 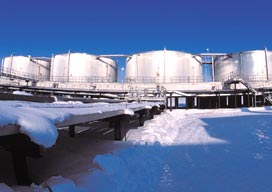 australian researchers have recently made an amazing announcement: atmospheric levels of methane, the second most potent greenhouse gas, have stopped rising. "Over the past four years there has been no growth in atmospheric methane concentrations. There was a 15 per cent rise during the preceding 20 years and a 150 per cent rise since pre-industrial times," says Paul Fraser, a chief research scientist at the Commonwealth Scientific & Industrial Research Organisation. The long-term observation has made scientists confident that is a genuine and significant trend, not just a short-term variation. If the trend continues, the gas concentration may soon start reducing.

The good news emerged from air samples taken at Cape Grim in Tasmania, which is a key station of the global atmospheric monitoring network. Although scientists are unsure why the emissions have stopped rising, they know where the reductions have happened. "The main falls have been in the northern hemisphere, which accounts for 90 per cent of the world's fossil fuel emissions," revealed Fraser. "We speculate that the reductions are from the Russian gas fields, either because of a drop in the consumption levels due to the economic downturn or because of better control of leaks from the reticulation system." The growing trend towards recovering methane emitted by landfill waste dumps may also be playing a crucial part in reducing the concentration of the gas.

The happening is echoed in another success story: levels of ozone-depleting chemicals used by industry have also decreased since the the late 1980s, after experts raised concerns about the thinning of the Earth's protective layer.