But no right to information 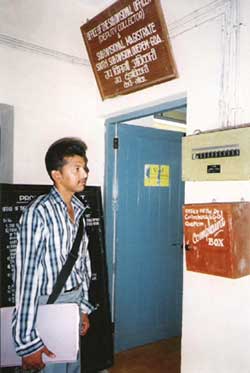 The mandarins might hold forth ad nauseam about the freedom of information, as enshrined in the Right to Information (rti) Act, 2005. But, as Amar Naik, a 24-year-old law student in remote Costi village in Sanguem taluka of Goa, knows, information is hard to come by.

Harassed and intimidated by government officials for demanding information under the rti Act, Naik refuses to give up his fight against a steel factory called Aparant Steel & Iron for the past six years.

The villagers have been complaining against the air and water pollution caused by this factory for a while, but an official fight started in early 2005 when Naik and a few others wrote a letter to the state governor through the mamlatdar (revenue administration official), complaining against the pollution. They also raised objections against trucks running late into the night on narrow village roads, despite a no-entry sign.

For almost six months, Naik didn't receive an acknowledgement. He then wrote a letter to the Goa State Pollution Control Board (gspcb), with a copy to the mamlatdar , Vinayak Volvoikar, on October 5, 2005. gspcb conducted a survey and noted in a report dated November 8, 2005, that "trucks were plying every 2-3 minutes and some of them were not covered with tarpaulin and graphite particles were found deposited on the soil surface and bottom of the rivulet".

It also noted the presence of the smell of burnt metal in the area and found that effluents from the factory were contaminating a natural stream. The report also said "fields were uncultivated and a nauseating smell of rotten egg/fish was prevalent...". A director of the company dismissed the problem saying "the company (was) monitoring the effluents periodically and sending the reports to the necessary statutory authorities".

Frustrated by the indifferent attitude of company and government officials, Naik took recourse to the rti Act. On November 29, he asked for information from Volvoikar on measures taken in response to his complaint. Naik also sent a reminder to Volvoikar on December 20 with a copy to A D Redkar, deputy collector, Quepem.

Redkar directed Volvoikar to take action and report compliance, but he refused to oblige. Naik sent another reminder to Volvoikar on January 9, 2006, requesting him to provide the necessary information. This time there was a swift response. Naik received a notice on February 2, 2006, from Volvoikar, asking him to be present for an inquiry on February 16. But on the appointed day, Volvoikar failed to turn up.

Two new dates -- February 21 and February 23 -- were fixed, with the same result. Volvoikar continued to abscond. On one of his regular rounds, Naik finally met Volvoikar, who, however, brushed him aside, pleading urgent work.

Naik responded with yet another letter to Volvoikar on March 23, noting the failure to respond under the provisions of the rti Act. For days, Naik did not hear from the mamlatdar. As a last resort, he filed a complaint against Volvoikar on April 3.

This, Naik says, triggered a campaign of intimidation, consisting first of late-night threatening phone calls from government officials. "Many government officials have visited my house since April suggesting I should not pick a fight with the mamlatdar. They say Volvoikar has a promotion pending and I should withdraw my appeal. They have promised me lucrative jobs. But I will not relent," he says.

Naik realised the fight was getting more dangerous. "On April 11, I received a call from the talathi of my village, Prakash Kandeparker, telling me to speak to the mamlatdar. I recorded the entire conversation," says Naik. According to Naik, the mamlatdar told him to withdraw the April 3 appeal, failing which he would ruin Naik's career. As a carrot, Volvoikar promised him internships under senior advocates.

Naik was, however, not ready to compromise. He filed a police complaint on May 7 against the mamlatdar for criminal intimidation. Meanwhile, he sent a transcript of the telephonic conversation with the mamlatdar to the vigilance department, collectorate and an inspector-general of police.

The threatening phone calls continued. Finally, on May 12, Naik's complaint was dismissed by the deputy collector, P K Velip Kankar, without any grounds being specified. The harassment from the mamlatdar's office continues. Recently, when Naik approached the mamlatdar's office to get his backward class and income certificates, he was turned away.

Down To Earth tried to get in touch with Volvoikar to ascertain some details of the story. But as soon as he heard Naik's name, he clammed up.