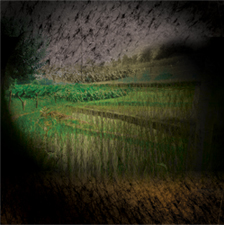 the growing demand for biofuels could lead to a shortage of food. Studies show biofuel plantations will eat up cropland, and trigger food and water crisis in many parts of the globe, especially in India and China.

There is also evidence to show biofuels will not help in carbon emission reduction, instead it will cause detrimental environmental impacts. The impacts of the growing biofuel demand will be apparent on a local level.
Many experts argue carbon emissions can be significantly reduced if biofuels replace fossil fuel in automobiles. Others argue greenhouse gases released during the production of biofuel crops can undermine the putative gains. They say that instead of promoting biofuel, conserving and growing forests will be more effective in slowing down climate change and its effects.

A paper in the August 17, 2007, issue of Science estimates carbon emissions offset by biofuel are lower than those achieved through afforestation. Renton Righelato and Dominick V Spracklen, researchers from the World Land Trust and University of Leeds, the uk, say biofuel plantations will end up emitting more carbon than they will help save (see figure: No gain).

To find out if biofuels will significantly help cut carbon emissions, the researchers calculated how much total emissions biofuels could save, comparing it to the carbon emissions which alternative land-use strategies like afforestation could save. This estimation was done for the coming three decades, a time likely to be taken to introduce carbon-free technologies to the world. It has been found that the carbon a natural forest can capture is about nine times more than what biofuels can save during this period.

For example, conversion of sugarcane to ethanol saves only about 1.78-1.98 mg (1 mg=1 tonne) carbon per hectare (ha) per year. Similarly, converting rapeseed to diesel will avoid only a range of emissions--0.34-0.51 mg carbon per ha per year. This is very low compared to the average emissions of 199 mg of carbon per ha given out when a tropical forest is converted into cropland. On the other hand, when abandoned tropical cropland gets naturally converted to a forest about 4-8 mg carbon per ha is sequestered.

The scientists say even if only 10 per cent of the fossil fuels in the us and Europe is replaced by biofuel, the demand will eat up about 43 and 38 per cent of cultivated area in the regions.
The impacts of a shift to biofuels would be more pronounced in the developing countries. A paper 'Biofuels: Implications for agricultural water use by researchers from the International Water Management Institute (iwmi) in Sri Lanka, under the Consultative Group on International Agricultural Research, predicts China will face shortage of land while India is likely to have severe water crisis. The study was released on October 11, 2007.

The researchers, Charlotte de Fraiture, Mark Giordano and Liao Yongsong, say globally biofuels use up one per cent of the available irrigation water and cover up 0.8 per cent of the cropped land at present. India and China will account for almost 70 per cent of the projected global growth in fuel requirement, between now and 2030. If the governments continue to promote biofuels with the current tempo, it is likely to replace 7.5 per cent of fuels. This will also require 30 million ha more of cropland and 180 km 3 of irrigation water.

"Even without increased biofuel production, water scarcity in these countries will be worse, as rising incomes and growing populations boost food demand," says de Fraiture. She adds that crop production for biofuels in China and India will threaten sustainable water use and affect irrigated production of food crops, including cereals and vegetables, which would then need to be imported in larger quantities to meet the demand.

China is already facing severe shortage of land and water. Considering the current demand for biofuel, the country will have to import 20 million tonnes maize, the chief biofuel crop, to meet domestic demand.

The paper by iwmi researchers says irrigation water in India will be impacted and additional 30 km 3 of water will be required to produce the 100 million tonne of sugarcane to meet the demand. This will affect food crops, necessitating their import. Over 40 million ha was set apart to grow the oilseed plant jatropha in the country in 2005. 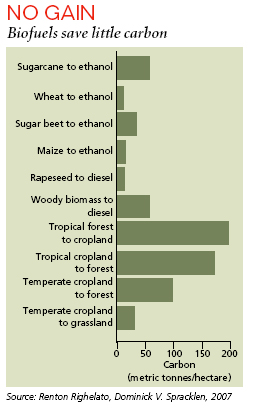 Qamar Qureshi, faculty member in the landscape level planning and management department of the Wildlife Institute of India, Dehradun, says the biofuel crops will alter the production of essential crops. "One need to estimate the cost for biofuel including water and subsidy", Qureshi says.


Corn ethanol production is rising in the us, a major emitter of carbon . The efforts for a biofuel switch have been augmented with the us president George W Bush recently calling for a dramatic increase in the production of ethanol over the next decade. This demand was widely criticized. If materialized, Bush's target would, say experts, see to it that 15 per cent of the liquid fuel used in the us being replaced by biofuel by 2017. The National Research Council (nrc) in the country recently convened a committee to look at how energy crops would affect the country's agriculture and water management, and the long-term sustainability of meeting the president's demand.

The report by nrc also said that encouraging ethanol production by growing more corn in the country without considering the quality and availability of water could strain water resources in the region. The lead author, Dara Entekhabi of the Department of Civil and Environmental Engineering of the the Massachusetts Institute of Technology, said orienting the us agriculture to biofuel cultivation could be done "in tandem" with regional water assessments.

Environmentally sound farming practices should be adopted in consideration of the full life cycle of biofuel production. The amount of rainfall and other hydroclimate conditions from region to region causes significant variations in the water requirement for the same crop, said the report.

Also, on October 15, 2007, a un expert on the right to food, Jean Ziegler, said production of biofuel was contributing to hunger by using up increasing amounts of farmland. He demanded a five-year moratorium on biofuel production. Countering Bush's call, he told media: "You don't have the right, even if you are battling climate change, to (perpetuate) this total massacre caused by the lack of food."

The study in Science says policy makers should focus on increasing efficiency of fossil fuel technologies.
There are still concerns if biofuels will be cost-effective considering the fluctuations in the fossil fuel prices and the already stagnant technology to convert crop to fuel.

There are ecofriendly biofuel options, through. Wolfgang Hoeschele, land-use expert with the Truman State University in the us says: "The biofuel I would regard as most important in India and South Asia generally is biogas derived from cow dung. Small-scale biogas digesters can bring employment; are cheap and clean for cooking; allow dung to be used for both energy generation and fertilizer."

All productive land in India is already in use and it is not sure if energy crops would support livelihoods and are ecologically sustainable. The lucrative market for biofuel puts the rich's luxury wants above the subsistence needs of the poor, he adds. Helmut Haberl of the Institute of Social Ecology, Klagenfurt University in Vienna, says since biofuels have large environmental implications like use of pesticides, "Strategies to reduce fossil fuel use through energy efficiency (reorientation of infrastructure policies to reduce traffic demand) should be given priority". Haberl recently authored a paper in the Proceedings of the National Academy of Sciences on July 31, 2007. "Our research indicates large-scale schemes to substitute biomass for fossil fuels should be viewed cautiously because they would put additional pressure on the ecosystem," he says.

A shift from forest to cropland has already used up much of the natural energy. Biofuels will worsen this problem. Haberl's team has found that people use up 25-39 per cent of the world's natural energy.