Rise of a fabric 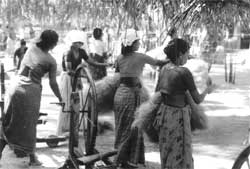 the coir industry of Kerala, spread over the coastal areas of Alappuzha, Kollam, Ernakulam and Thiruvananthpuram districts, has been facing odds since early '60s. But thanks to the new environment consciousness emerging among western consumers, this troubled industry now pins its hopes on the increasing demand for coir abroad, as a natural bio-degradable fibre.

One of the several reasons attributed to the decline of the Indian coir industry, as P Ajith Kumar, development officer in Coir Board of India, says is "the severe competition that our coir industry has to face from plastic and other synthetic products". While Indian industry lagged behind due to outdated production methods, Sri Lanka succeeded in providing better quality yarn and coir fibre in the world market, with the modernisation of their coir industry.

In the past, retting of coconut husk took six to 10 months, polluted the backwaters and wetlands. The Central Coir Research Institute at Alappuzha, the research and development wing of coir board, has now come up with a new product called 'Coirret,' which can convert green husk brown fibre into white fibre within 72 hours. With the large-scale application of this method, experts anticipate pollution in the coir production to be minimised. The durability and moisture absorption capacity of coir is higher than jute, so it is more suitable for producing geo-textiles. Western countries have already started using it for river embankments, road side slopes, plant protection etc. In Australia and Switzerland, coir has been used with positive results on ski slopes, for high altitude erosion control.

But the Indian coir industry needs to evolve a supporting market from within the country, and expand trade in the western market as an added bonus.