Risky behaviour on the rise, so are its health effects: World Bank

Risky behaviour is increasing across the world and so is the threat to  people's health, warns a World Bank report released on Wednesday. These risks include smoking, using illicit drugs, alcohol abuse and unsafe sex. The impact of such behaviour justifies public intervention, says the report.

Worldwide estimates indicate that 99,000 to 253,000 adults die each year from drug-related causes, corresponding to a mortality rate per million of 22 to 55.9.

In 2011, tobacco use killed close to six million people, with nearly 80 per cent of these deaths occurring in developing countries. Close to 20 per cent of the world’s adult population smokes cigarettes, says the report.

The vast majority of the world’s smokers live in low- and middle-income countries. In 2009, China consumed more than 38 per cent of the world’s cigarettes (2,265 billion). The next four high in the list of cigarette consuming countries are the Russian Federation, the United States, Indonesia, and Japan (with 390, 316, 261 and 234 billion respectively). In Nepal, prevalence of smoking in women is around 28.4 per cent.

The report also points towards unhealthy dietary practices. It says that number of overweight and obese people are on the rise in developing countries and coexist with the underweight. It is the paradox of the coexistence of both under-nutrition and over-nutrition in the same population across the life course. It has been labelled as the double burden of malnutrition.

In all of these cases, it has been found that engaging in risky behaviour carries considerable risk of both dying early and living many years with compromised health. The consequent diseases are expensive to treat, even in low-income, resource-poor settings, and they exert a significant toll on individuals’ productivity. Such risky behaviour increases the  challenges for society manifold.

For instance, smoking has significant impact on the society not only in terms of cost but burden also (see graph).
Direct Costs of Smoking 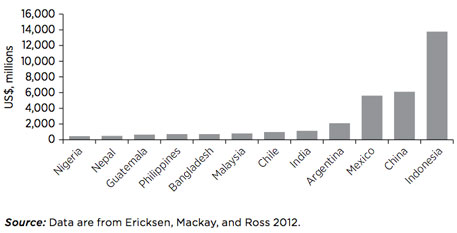 Referring an old study, the report says that in India, the smoking attributable fractions for the male population older than 35 years is quite high for respiratory diseases (30.04 per cent), tuberculosis (33.43), cardiovascular diseases (17.65), and cancers (38.47). These translated into costs that exceeded the total excise tax revenue collected on tobacco products in the same year in 2004.

In India, where most health care expenditure is financed out of pocket, the direct costs associated with these diseases stood at US $1.10 billion, which was nearly 14 per cent of all expenditure on hospitalisation, outpatient services, and drugs, or 0.35 per cent of GDP.

Direct health expenditures totalled US $834 million. Expenditure on transportation and caregivers for each inpatient or outpatient health care visit amounted to another US $65 million, while income lost due to work absences when hospitalised or seeking outpatient care totalled US $314 million. 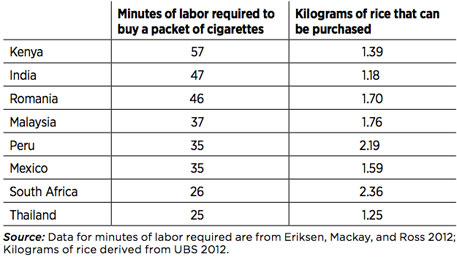 Importance of this cost could be understood in different terms also. For instance, the report highlights that total 47 minutes of labour is required to buy a packet of cigarettes in India.  The report also compares the cost of one packet of cigarettes with calories purchased for same amount (see table above and graph below). 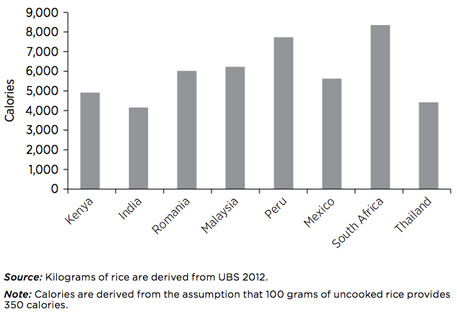 Similar is the case with other diseases like diabetes and sexually transmitted diseases.

The report also talks about the effectiveness of intervention such as legislation, taxation, and behavioral change campaigns and cash transfers to combat the challenges posed by risky behaviour.

The report suggests that public intervention is justified.  It says that certain policies, when implemented properly, can improve overall welfare.

The possible interventions could be price-based regulation, channel factors, no regulatory partnerships or voluntary controls and education or information.

Evidence suggests that legislation tends to be effective, especially when enforcement mechanisms are strong.

One of the strategies could be the increasing tax on smoking and consuming alcohol. It has proved effective in developed countries, says the report. Few developing countries like China and Indonesia have also shown similar results. Increasing awareness could also be effective tool, says the report.