Protests embankments along the Adhwara group of rivers, saying the structures will render farms infertile 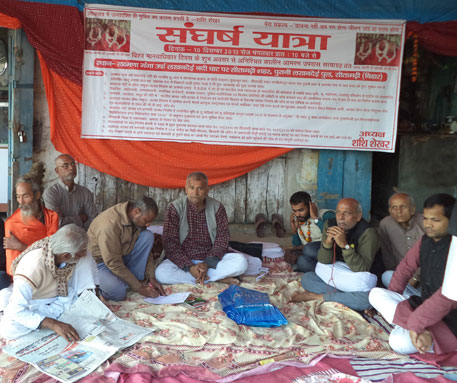 Shashi Shekhar, a river activist, has been on an indefinite hunger strike in Sitarmarhi district since December 10, in protest against the taming of the Adhwara group of rivers, which originate in the foothills of Nepal. He is also demanding measures to revive the Lakhandei river.

In a memorandum submitted to the district administration, Shekhar pointed out that the construction of embankments    will render hectares of fertile land barren. Farmers are also protesting the construction of embankment along the Jheem-Jamura river (part of the Adhwara group), saying the fresh soil brought by the river each year by floods make the farms fertile and that the embankments will interfere with this natural process.

Shekhar and other activists have accused the Bihar government of neglecting the upkeep of rivers in the state.

According to Shekhar, the Lakhandei has shifted westward in the past one past decade. “The river has now completely merged with Jamura river. This has led to the problem of flooding in the villages on the banks of the Jamura,” he said. On the other hand, farmers who received water from the Lakhandei before it shifted course have now been left high and dry.

Shekhar said that erecting embankment along the Jheem-Jamura is not the solution to flooding. He has suggested that a simple effort to training the Lakhandei to return to its old course and joining it with the stream at Runnisaidpur will revive the river. This measure will help thousands of farmers along the Lakhandei river to resume agriculture, he said. Dinesh Mishra, another activist also said the Lakhandei can be revived through a few initiatives and that activists have been demanding action to save Sitamarhi's rivers since 1954. The important rivers flowing through the district are Bagmati, Lakhandei and the Adhwara group.

Shekhar has levelled serious allegations against firms that have been awarded tenders for construction of embankments along the Adhwara group. In the memorandum, he has alleged that a firm is purchasing sand and soil from the farmers at a rate much lower than what has been fixed by the government.

“For sand and soil purchase, the firm is threatening farmers,” Shekhar said.

Activists have also demanded that the government should hire river and embankment experts to study the environment and livelihood feasibility in the region. They are also demanding a public hearing to take into consideration the views of local people about the construction of embankments.

Shekhar said that he would neither budge from his stand nor break his indefinite fast till the matter is resolved.


Life in the shadow of embankments: turning lost lands into assets in the Koshi Basin of Bihar, India

Geomorphological manifestations of the flood hazard: A remote sensing based approach