THE world’s rivers are threatened due to mismanagement and pollution. This imperils eight of every 10 people as well as 10,000-20,000 species that call them home. This is the finding of the first global initiative that assessed water security for people and river biodiversity. Eleven scientists identified 23 stressors, such as pollution, intensive agriculture, catchment disturbance and dam building, and integrated them to prepare maps showing their impact on the health of rivers and associated habitat. 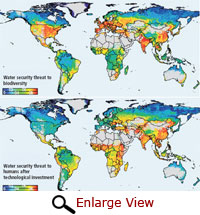 The maps show 30 of the 47 largest river systems that collectively discharge half of the global runoff to the oceans are at risk. Rich countries in Europe and North America have offset the risks of losing drinking water supply by 95 per cent through massive investment in technologies such as dams, aqueducts, deep borewells and water treatment plants and ensured safe and sufficient water to their people. But this has been done at the cost of river ecology, the scientists reported in the September 30 issue of Nature. The maps show the river systems in most of the US and western Europe are at the greatest risk despite decades of pollution-control efforts and technological means to protect and restore river ecosystems.

For instance, Peter McIntyre, one of the scientists who is at University of Wisconsin in the US, explained, there are thousands of dams in each large river basin in North America. They have systematically eliminated migratory fish like salmon and endangered dozens of mollusc species. “While we have technological innovations to secure water for humans, there is little innovation for biodiversity protection,” McIntyre said.

The report warns similar degradation is occurring in developing countries, which do not have the resources to invest in technologies to clean their rivers and where population has been growing rapidly. Brazil, Russia, India, China and OECD (Organisation for Economic Co-operation and Development) countries need US $800 billion annually to improve their water infrastructure to meet the millennium development goal.

The maps show because of poor investment developing world faces high threat for both humans and biodiversity. The study urged developing nations not to follow the rich. “Developing countries are in a position where they can achieve water security in a sustainable way,” said Bharat Jhunjhunwala, an economist in India who recently authored a book on dam removal in the US. The scientists suggest adopting strategies such as protecting watersheds to reduce costs of water treatment.

New York City, for example, bought an area of the Catskills Mountains to help provide naturally filtered water, reckoning it cheaper than upgrading its water treatment plant. Instead of building costly artificial barriers to allow cropland on floodplains, policymakers can consider options like preserving floodplains and wetlands as they absorb the shock of floods, they suggest.