Many rivers in Australia are in a poor state, say researchers 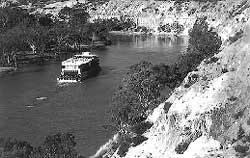 ACCORDING to Australian researchers, few Australian rivers remain wild while most are suffering the ill effects of agriculture, industry and human settlement. Researchers at the Australian National University (ANU) say that only three regions contain rivers in pristine condition: Tasmania, the Prince Regent area in the west Kimberley and Arnhem Land.

The Murray-Darling basin was found to be one of the most polluted areas because of farming and dam construction. The agricultural productivity and ecological sustainability of the river system is seriously threatened by spreading salt poisoning, caused largely by tree clearing, and the run-off of pesticides and fertilisers. The four-year research project was commissioned by the Australian Heritage Commission of the anu Centre for Resource and Environmental Studies.

"When you look at other studies of the rivers, you can see a severe loss of biodiversity in disturbed rivers, so it is very significant that we try to look after what we have left," said Janet Stein, one of the researchers. While the findings are still being analysed, preliminary results published in an anu newsletter found that, in general, rivers deteriorated as they neared the sea because of the accumulation of pollutants and larger populations living near the coast.