HIV/AIDS, suicide among other top causes. The good news is that rates of cigarette smoking are decreasing in 10-19 years age group in some countries 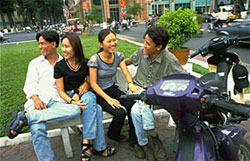 A report released by World Health Organization (WHO) on Wednesday says depression is the predominant cause of illness and disability for both boys and girls aged 10 to 19 years. The top three causes of global adolescent deaths are road traffic injuries, HIV/AIDS, and suicide. In 2012, an estimated 1.3 million adolscents died owing to various reasons.

To put together the report—Health for the World’s Adolescents—researchers used published data and consulted adolescents in age group 10-19 years.

“The world has not paid enough attention to the health of adolescents,” says Flavia Bustreo, assistant director-general for family, women and children’s health, WHO. “We hope this report will focus high-level attention on the health needs of 10 to 19-year-olds."

The report concludes that road traffic injuries are the number one cause of adolescent deaths globally, and the number two cause of illness and disability. Boys are affected more—the number of deaths of boys is three times that of girls. The report says increasing access to reliable and safe public transport can reduce road traffic injuries among adolescents. Road safety regulations (alcohol and speed limits) and establishing safe pedestrian areas around schools can reduce risks. It also recommends graduated licensing schemes, in which a full driver's licence is given after many steps, usually three. Till then, a person has to follow certain restrictions while driving.

HIV ranks as second cause for deaths among adolscents globally. The concentration of such deaths is found in the African region, which is showing a rise in HIV-related mortality.

Globally, depression has been found to be the number one cause of illness and disability in this age group. Suicide ranks third among causes of death. Some studies show that half of all people who develop mental disorders have their first symptoms by the age of 14. The report recommends adolescents with mental health problems be given the care they need to prevent deaths and avoid suffering for a long period of life.

Maternal deaths still cause of concern

The good news is that maternal deaths have fallen in this age group. Deaths due to complications of pregnancy and childbirth dropped significantly since 2000. More so in regions where maternal mortality rates have been, and still are, the highest. WHO’s South-East Asia, Eastern Mediterranean and African Regions have seen estimated declines of 57per cent, 50 per cent and 37 per cent, respectively. However, despite such improvements, maternal mortality ranks second among causes of death among 15 to 19-year-old girls globally. It is exceeded only by suicide.

Deaths due to measles have fallen, too, owing to childhood vaccination. In the African region, measle-related deaths fell by 90 per cent between 2000 and 2012.

However, other common infectious diseases are still killing adolescents. For example, diarrhoea and lower respiratory tract infections rank second and fourth among causes of death in 10 to 14-year-olds. Combined with meningitis, these conditions account for 18 per cent of all deaths in this age group. The corresponding figure was 19 per cent in 2000.

The report recommends behavioural change among adolescents to save them from getting diseases at a later age.

“If left unchecked, health problems and behaviours that arise during adolescence—such as tobacco and alcohol use, diet and exercise patterns, overweight and obesity—have a serious impact on the health and development of adolescents today, and potentially devastating effects on their health as adults tomorrow,” says Jane Ferguson, scientist in WHO’s Department of Maternal, Newborn, Child and Adolescent Health and lead author of the report. “At the same time, we must not let up on efforts to promote and safeguard the sexual and reproductive health of adolescents, including HIV.”

Feature: A study of health status among school going adolescents in South India

Feature: Electronic cigarette use among Korean adolescents: A cross-sectional study of market penetration, dual use, and relationship to quit attempts and former smoking