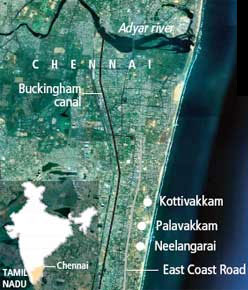 On december 1, 2009, the Tamil Nadu government changed the landuse classification for three villages on the Chennai coast. Environmentalists say the move would regularize illegal houses overlooking the beach and lead to a real estate boom in the area.

The three villages—Kottivakkam, Neelangarai and Palavakkam—earlier fell under the Coastal Regulation Zone (crz) III and hence, no development was allowed within 200 metres of high tide line in the area. Their status has now changed to crz II, which allows development closer to the shoreline but on the landward side of an existing road.

Gilbert Rodrigo of Tamil Nadu Pondy Fishers’ People said the development of the East Coast Road (connecting with Pondicherry) in the 1990s had encouraged unauthorized development along Chennai’s south coast; the reclassification would lead to further development.


“Once the area is developed, there would be pressure to move the fisherfolk out just like those on the Marina Beach,” said Rodrigo. The three villages fall in the middle of a rapidly developing upmarket area; the going market rate for a plot of 700 sq m is Rs 1.5 crore.

Following the reclassification, existing buildings that don’t have requisite permission can apply for them; panchayats would issue permission in their area including that under the crz.

Rodrigo said a road built near the villages, close to high tide line, three years ago has led to mushrooming of houses on the beach. They can be easily legalized now. Chennai civil rights activist V Srinivasan said the high court in 2008 ruled the road is illegal.

The three villages were reclassified as they had over 50 per cent built-up area before 1991 when the crz notification came into effect, an environment ministry official said. But not all agree with the claim. “The area was not developed till the late 1990s and we would prove this by satellite images,” said Sudarshan Rodriguez of Dakshin Foundation.