Road to Cancun - Waivers on paper

The only semblance of fairness that exists in the various agreements of the World Trade Organization is contained in their 155 "special and differential treatment" provisions. These are meant to benefit developing countries exclusively by giving them preferential access to developed country markets on suitable terms, and allowing deviations from their own obligations... 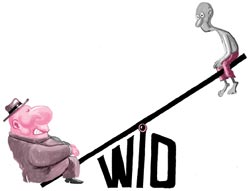 the only semblance of fairness that exists in the various agreements of the World Trade Organization (wto) is contained in their 155 "special and differential treatment" provisions. These are meant to benefit developing countries exclusively by giving them preferential access to developed country markets on suitable terms, and allowing deviations from their own obligations. But couched in non-mandatory language, several such clauses are unenforceable. Highlighting this anomaly, India's Union minister of commerce and industry, Arun Jaitley, recently pointed out that resolving the issue of reassessing these provisions "would be a sine qua non (indispensable condition) for the success of the next wto ministerial conference (in Cancun)".

To be sure, a decision to review these provisions to make them more "precise, effective and operational" was taken at the instance of developing countries during the 2001 Doha ministerial meet. But the victory seems illusive a year-and-a-half later due to the divergence between rival camps. Three deadlines have been missed to date -- the last one having passed on February 10, 2003.

There are numerous instances of the provisions being peppered with escape routes. The terms in the Agreement on Technical Barriers to Trade (tbt) are a glaring example. They require that developed country members take into account the special development, financial and trade needs of developing countries when formulating or applying technical regulations. The tbt pact seeks to ensure that packaging, marking and labelling requirements do not create unnecessary obstacles to trade. However, the agreement also permits countries to establish such measures as they consider appropriate. Consequently, developing country exports face barriers and are unable to comply.

A proposal put forth by a group of developing countries, including India, recommends making an addition to the special and differential treatment provision in the tbt agreement. It would mandate an importing developed country to provide an exporting developing country with the necessary technology, preferably free of cost, if the latter faces specific problems in complying with the regulations imposed by the former.

In another pact governing food safety and health standards -- the Agreement on Sanitary and Phytosanitary Measures -- the special and differential treatment provision allows developing countries specific and time-bound exceptions to implement their obligations. A group of African countries has proposed making the language mandatory and also wants the time-bound exception to be fixed at a minimum of three years. If accepted, such recommendations could go a long way in levelling the playing field.

The most significant difference of opinion exists in the interpretation of the Doha mandate itself. Developing countries believe that to implement and strengthen special and differential treatment provisions, meaningful changes would have to be made in the language in various existing wto agreements. Developed countries, however, contend that any significant textual change can take place only in the context of new negotiations. This could, in effect, lead to trade-offs in other new areas such as agriculture and services. Developing countries assert that these are not new negotiations but an attempt to make the existing agreements more effective.

The other area of contention is whether priority should be given to the developing countries' 88 proposals on specific aspects of the special and differential provisions in the wto agreements, or to issues that cut across agreements. Developed countries are in favour of addressing the broader 'principles and objectives' first to provide a frame-work for the evaluation of specific proposals. Developing countries, on the other hand, insist that the Doha mandate includes only the review of specific provisions.

In an attempt to revive the negotiations that broke down during the February 2003 meeting of the Committee on Trade and Development (ctd), ambassador Carlos Perez del Castillo of Uruguay, chairperson of the General Council, circulated an "approach" paper on May 5, 2003. While ctd is responsible for examining the mandate, the General Council is the highest decision-making body of the wto. Castillo's document deals only with agreement-specific proposals, grouping them into three categories.

These include the following: firstly, the proposals that are more likely to be agreed upon before the Cancun ministerial; secondly, proposals that the chair feels would be best addressed by wto subsidiary bodies other than the ctd (such as the African group's proposal); and finally, proposals on which wide divergence exists (like the developing countries' suggestion on the tbt agreement).

The aim of such an informal categorisation appears to be the depiction of some meaningful outcomes before Cancun. It could, however, end up diluting the language and undermining the very purpose of the review of these clauses.