Thin film, no more than a few microns thick, can endow substances with hardness, magnetic, superconducting and optical properties 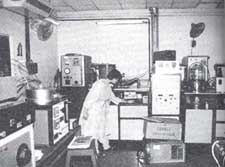 IF YOU have ever blown soap bubbles as a child, you must have wished that the short-lived, rainbow-coloured spheres were more rugged. Looking at the flimsy soap film one could hardly have imagined that thinner films could be made as hard as diamond. But "thin film" technology has achieved this feat, illustrating once again that science can often attain the "impossible".

Thin film technology works by depositing coatings -- often no more than a few microns thick (1 micron is 1,000th of a millimetre) -- of materials with special characteristics such as hardness, superconductivity and magnetism, on a solid base, using sophisticated processes.

Apart from hard films for cutting tools developed by the Indian Institute of Technology, Delhi, this technology is also behind the success of computers and products like compact discs and the latest sunglasses.
Thin films not only help cut costs because they require small quantities of source materials while retaining their properties, they can also be custom-made for desired structures and properties.

Light coatings of semiconducting materials (materials in which the flow of electricity can be controlled) such as germanium on glass or alumina are used in electronic equipment. Superconducting mixtures of metal oxides of copper, yttrium and barium, which can conduct electricity without offering any resistance at minus 196 degrees Celsius, can also be coated on glass and alumina and be used to generate high magnetic fields for work like magnetic levitation. Thin films are also used for optical purposes -- they reflect a predetermined part of available light or filter it.

Thin films are deposited on substances through several processes. Most commonly, the material in question is vaporised in a vacuum, and the vapours are then deposited onto the chosen substance as a carapace of film. Other techniques include electroplating and screenprinting.
IIT's thin film laboratory is in the forefront of research in this area in the country. Its scientists have recently developed gas sensors based on the technology. The gas sensors are coated with thin films of the oxides of metals like titanium, manganese, iron and cobalt, whose electrical conductivity decreases when they adsorb certain gases on their surfaces -- a phenomenon in which gas molecules simply occupy the invisible cavities on the thin films without any chemical reaction. The change in conductivity indicates the gas concentration. Interestingly, these adsorbed gases can be released by simply heating the film, which can then be reused.

Says L K Malhotra, head of IIT's thin film lab, "The biggest challenge in making these sensors is to ensure that the thin film is specific to only one particular gas, and that it can be quickly regenerated."

The IIT team has also developed a sensor to detect alcohol vapours. Malhotra reckons that the sensor, which could be used to test vehicle drivers under the influence of alcohol, will cost less than the imported ones currently used.

Another sensor the team is trying to produce will be sensitive to carbon monoxide. This, the team says, will be useful in monitoring environmental pollution. In fact, the ministry of environment and forests has provided funds to develop the sensor.

IIT's scientists have also developed special thin films of silicon dioxide for protective coatings on CDs. These protective thin films are formed over laser-recorded plastic plates through a process called "photoetching", which makes them resistant to damage by light.

The IIT team's hard-as-diamond coating is a carbon film 1 micron thick deposited on silicon by a technique called "plasma deposition". The diamond-like-carbon (DLC) film, as it is known, can be used to make cutting tools, replacing the rare and expensive diamonds that have traditionally been used. Malhotra also says that the DLC film is a good conductor of heat and electricity, so it can be used as a heat sink for the integrated circuits of supercomputers.

Thin film technology is popular among scientists and apart from the IIT, Delhi, research teams from the Capital's National Physical Laboratory and the Solid-state Physics Laboratory are also investing a great deal of time and energy in this technology. Whereas NPL scientists are working on highly reflective coatings for glass, those at the SPL have developed thin films for defence applications.
The highly reflective mirrors developed by the NPL thin film team can be used in laser generation. The reflective film is a stack of 17-21 layers of titanium dioxide deposited on glass, each layer being 6-8 microns thick. This film, says R Bhattacharya, head of the NPL thin film division, can reflect as much as 99.5 per cent of the light that falls on it. The team has also developed improved antireflection glasses used in military fighter aircraft. Several layers of thin films of cerium fluoride and magnesium fluoride are used, reducing the reflection to less than 1 per cent. Claims Bhattacharya, "Ours is one of the best laboratories in the world for optical coatings, and our technology has been picked by the defence establishment."

Scientists at the SPL, a Defence Research and Development Organisation lab, recently produced a film of a compound of mercury, cadmium and tellurium. This can be used to make high qality infrared detectors for guiding missiles.

It is a generally held view that Indian capabilities compare favourably with those abroad in the area of thin film technology. But scientists point out that vacuum technology essential to deposit these films on substances remains to be upgraded in India.