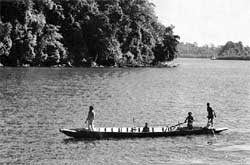 even as the one-member committee -- appointed by the Supreme Court (sc) to assess the impact of tree felling in the Andaman and Nicobar Islands -- is ready with its report, the local administration is making the case for circumventing a blanket ban on timber-related activities in the region. Andaman officials feel that the economy and livelihood issues of the island will be impacted if all the directives of the apex court are implemented. But experts aver that the authorities' contention does not hold water, given the ecological wealth at stake.

Shekhar Singh of the Indian Institute of Public Administration (iipa) has prepared the report. He has visited the islands twice and is expected to submit his findings to the sc soon. The history of the case can be traced back to 1995 when a writ petition was initiated suo motu by the apex court on the basis of a letter received by it from Godavarman Thirumulpad of Tamil Nadu. The sc later passed an order prohibiting the felling of trees all over the country. In the current instance, the case that was to be taken up on February 4, 2002, will now be heard on February 11.

According to Pankaj Shekhsaria of Kalpavriksh, a Pune-based non-governmental organisation (ngo) which is a party in the case, the ban on tree felling will not have any major repercussion with regard to the livelihood aspect. "It is the authorities who have to provide alternatives," points out Shekhsaria and adds that there are bright prospects in sectors like fishery and work related to the restoration of the ecology. Parties in the case have suggested that the local people should also be allowed access to forests.