CHANDRA PRAKASH KALA spent three months with the Baiga tribe in the forests of Chhattisgarh. He learnt how they use plants to their advantage 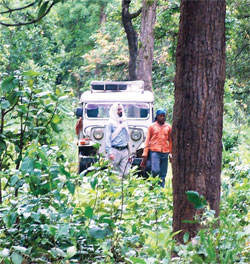 IT WAS a rainy day in August 2008. The moment I entered the thin deciduous forests of Parsa village, I realized what was worse than getting caught in a downpour—mosquitoes. Every uncovered part of me was bitten in seconds. I was in the forests of Surguja district in Chhattisgarh to lay a transect. It is a path along which one counts the number of times a plant species has occurred to have an idea of its abundance. This was to help me identify the species of plants that are useful to humans for a variety of reasons. But I had to abandon the plan for that day. While I battled the army of blood suckers, Ramdhan, my field assistant, and a local Baiga man in his 60s, stood calmly with an unperturbed smile. Ramdhan said the mosquito problem was not a big one. I attributed this to his years of growing up in the Central Indian forests. He was used to the menace, obviously. I was born and brought up in the Himalaya. There, the cold keeps mosquitoes away. The next day I entered the forests with mosquito repellant cream on my body. The heat and the humidity and the sweat washed away the cream. The only refuge now was to cover my neck and face with a piece of cloth. This became my forest gear. And one day, I noticed it. Ramdhan was deftly swiping at mosquitoes with a tender branch of leaves in his right hand. I saw some branches of the same plant all around his neck. That aroused my curiosity. The plant was Chloroxylon swietenia, locally called bhirra. It has been used for centuries by tribal communities as a mosquito repellant. The tribals rub bhirra leaves on the exposed parts of their body and also wear its twigs on the head and neck. It was a good start. 73 plants Forty-four tribal groups are known to live in Chhattisgarh. Forests comprise almost half the land there. For decades, tribes have accumulated knowledge of the natural resources through trial and error and oral tradition. I continued to explore the forests of the Udaipur block in Surguja district and recorded 73 plants which tribal and non-tribal communities living there use. The plants get them money. Considered the secret to good health, they are also used as food, beverages and medicines. Of the 73 plants, 36 had a special use. Sukhnandan, a teenager with some primary education, told me that people here believed in ghosts and spirits. So when someone was ill, he or she would consult a healer. The healing ritual included use of the 36 plant species. People spend most of their time in the forests for rearing livestock and gathering firewood, fodder, medicinal and edible plants. The forested area around the villages is fragmented because of activities like heavy livestock grazing and felling of trees. Snake bite is common. The healer makes a paste of tendu roots (Diospyrus melanoxylon) to use as anti-venom. If he does not find tendu, he tries the root of jamrasi (Elaeodendron glaucum) or kekad (Garura pinnata). Syam Nath, another teenage guide from Parsa village, saved me one day. It was close: I was walking fast and did not notice the two-foot long snake. Nath could not have screamed any sooner. It was a cobra. The antidote for scorpion bites is a paste of gathiya leaves (Achyranthus aspera) and juice of the ban pyaz (Urginea indica) tuber.

Having lived in the Himalaya for over a decade and a half, I am familiar with its plants and animals. An edible mushroom called gucchi (Morchella esculenta) grows in the shady and wet forest floors of the Himalaya. It is a gourmet’s delight and expensive too—Rs 4,500 per kg. People believe strong flashes of lightning help enhance gucchi production. I found the tribals of Surguja digging for a mushroom, which was purported to be as delicious as gucchi. Khukri, as the mushroom is called, grows in soils infested with termites. We collected about half a kg from termite dunes one day. But my cook dulled its taste with too many spices. The next time he managed to get it right. I also recorded 22 other edible plants. People here relish fruits and vegetables of plants like lasoda (Cordia mixa), anar (Punica granatum), saroti (Antidesma diandrum) and pakhri (Ficus infectoria) among a host of others. Tendu’s fruits are also eaten. Fishing, a money earner for the tribals, is made easier with a kind of powdered fish poison that is obtained from the roots of goriyar (Acacia caesia), the bark of tilsa (Ougenia dalbergioides) or the fruits of menda (Randia dumatorum). Tribals use the powder with care. They target streams whose water is unfit for drinking. Usually, they plug the flow of running water with stones and sprinkle the powder in the area. This kills the fish. Dinner is never complete without a drink. People have their own brand of liquor: mahua. They collect fruits and flowers of mahua (Madhuca indica) and dry it first to prepare the liquor. Fast disappearing tradition Several of the plant species I surveyed during my three-month stay in Surguja are rare and endangered. The communities have for decades used their traditional knowledge to harvest these species. And now they have a market for it. This is leading to exploitation and neglect of the traditional collection practices. Destructive harvesting practices have also been reported. Sarpagandha (Rauwolfia serpentina), a highly valued medicinal plant, has dwindled because of poor seed germination. The International Union for Conservation of Nature has classified the plant critically endangered. The species can be saved if people are educated on the consequences of overexploitation and trained to process products themselves. This might earn them a few rupees and stop them from destroying plant diversity. Ramdhan is an excellent example of this knowledge. He knew the local names of most of the woody plant species and identified several herbaceous species. He has had no formal education. The country needs more taxonomists like him. Ã”Ã»Ã¡