Rs 250 for endosulfan victims in Kerala 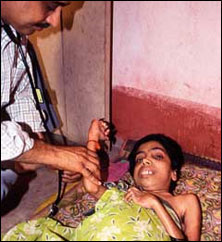 On december 16, the Kerala government announced compensation for about 2,000 people affected by spraying of endosulfan in cashew plantations of Kasargod district. For 25 years, till 2002, the Plantation Corporation of Kerala had sprayed the pesticide on its land. Villagers suffered the consequences.

The compensation, recommended by a three-member state government committee, includes pension of Rs 250 per month for the family of the deceased and caretaker of the victim. The state also announced a monthly quota of 35 kg rice at Rs 2 per kg for the victims.

The committee, in a two-month study starting October this year, found severe health implications of endosulfan among people. “We found high incidence of cancer, congenital abnormalities and skin diseases,” said committee member Jaykrishnan T of Kozhikode Community Medical Centre. “We recommended there should be long-term studies on the air, water and milk samples of the district as well as on the rate of abortion and delayed puberty,” he said, adding the compensation might increase after the studies are completed.


Of the 11 gram panchayats studied, Muliayar village had the maximum affected people in Kasargod (see ‘Lies, damn lies and endosulfan’ , Down To Earth, April 15, 2004).

Public health experts said the compensation is a pittance. “The polluter must pay and in this case the Plantation Corporation of Kerala should be held liable,” said M A Rahman, retired professor, who works with the Kasargod victims. “We are not satisfied, but at least the government has accepted the damage,” he said.

The state government plans palliative care units and has allocated Rs 125 lakh to improve medical facilities for the victims.

On December 7, Union agriculture minister Sharad Pawar had said there would be no ban on endosulfan as the committee appointed to study its health effects did not recommend it.