Rule of the gangs 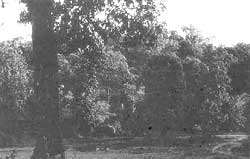 When Garhchiroli district collector Subrath Rathod seized a truck illegally transporting teak in Maharashtra last September, an enquiry was held and it showed that illegal timber-felling in eastern Maharashtra, particularly his district and neighbouring Bhandara, is widespread and involves forest, revenue and railway officials. The two districts contain more than 40 per cent of the state's revenue forests.

In nine cases of illegal tree-felling investigated by Rathod, loggers persuaded local revenue and forest officials to reclassify forest land as well fudge forest maps. The loggers got railway guards and drivers to make unscheduled halts so wagons could be loaded with the poached wood. It is estimated timber worth more than Rs 2 crore was stolen in January alone.

The state's chief conservator of forests was at first extremely wary of admitting political involvement and it was only after repeated egging that Rathod was able to get local forest officials to file a criminal complaint. The main accused in the tree-felling case is a private contractor, Yashwant Dautalwar, who is believed to be close to Maharashtra forest minister Dharamrao Atram.