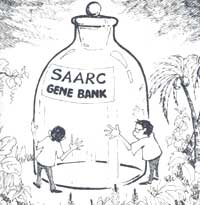 EFFORTS of the South Asian Association for Regional Cooperation (SAARC) to create a gene bank appear to have stalled barely a year after steps were taken to start it. The proposal to start the gene bank was accepted at the 1990 Male meeting of SAARC and was taken up at the meeting of the association's group of experts on biotechnology held last year. The meeting, which was expected to finalise the modalities of setting up the bank, concluded with a recommendation that "procedures should be evolved for exchange of germplasm and other materials of interest among SAARC countries within themselves."

But almost a year later, there has been little progress on the gene bank front. Says Manju Sharma, advisor in the department of biotechnology, "An expert committee on biotechnology was to have been set up but that has not happened so far."

The lack of response to the proposal has disappointed the Indians. Adds Sharma, "(after almost one year) we are still waiting for replies, ideas and proposals from the other countries."

The idea is ambitious -- to have a common gene bank which stores and documents precious plant collections from all SAARC countries. Nagesh Kumar, fellow at the Research and Information System for Non-Aligned and Other Developing Countries, is a strong proponent of the bank. He points out that in the North there is a trend towards privatisation of genetic resources, which were earlier in the hands of governments. For instance, the British government has recently sold the Cambridge Plant Breeding Institute along with its germplasm collection to the industrial giant, Unilever. Developing countries, from whom these genes were taken, could easily find that they have no access to their own genetic resources stored in international banks. "But protecting genetic resources is an extremely expensive exercise and it would be possible only if developing countries pooled their expertise and money," says Kumar. He also suggests that while the South should exchange genetic resources freely, there should be a charge for Northern users. This 'compensation' should be adequate to subsidise the maintenance costs of the banks.

The proposed SAARC gene bank is part of a larger initiative of the Group of 15 (G-15) -- a grouping of developing country nations -- to have a network of gene banks in the countries of the South. The collection will concentrate on medicinal and aromatic plants, which have an enormous economic potential. The programme has three regional coordinators -- Brazil for Latin America, Egypt for Africa and while India for Asia as well acting as the overall coordinator of the programme. The scientific advisory committee (SAC) of the G-15 met a few months ago in Delhi to formulate the steps ahead.

But on the SAARC front, the movement has been slower. A veteran SAARC-watcher puts this down to fears that India would "dominate" the bank. "There could be suspicion that India would hang on to the stock and refuse to share at a later stage," he said.

But Kumar and Sharma dismiss such fears. Kumar pointed out, "In gene pools, no country is self-sufficient. And advances in the field have now made it possible to separate one characteristic of, say, soya bean and insert it into maize to get an improved variety. We all may gain more than we lose."