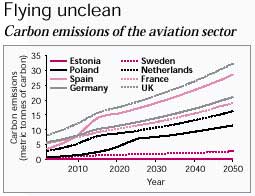 the muted debate on whether the emissions trading scheme (ets) should apply to the eu 's aviation sector took a controversial turn recently. eu environment commissioner Stavros Dimas termed a proposal by the uk's largest airport owner, baa, to integrate the sector into ets as a "possibility that merits serious consideration". But experts say ets -- buying the right to emit climate change-causing greenhouse gases (ghgs) by investing in clean projects -- is being offered as an easy way out for the sector, as it is a key benefactor of the economy.

The European Commission is currently weighing three options to deal with aviation emissions: inclusion in ets, a fuel tax or extra ticket charges. "Emissions trading is the most probable to be approved," said Dimas, adding: "But airlines are unlikely to join the system until after 2012, when the first time period covered by the climate change treaty [Kyoto Protocol] ends." The final strategy would be decided only by June/July 2005, he said.

The Commission's decision will be significant, as the aviation sector is the fastest-growing emitter of ghgs in the eu, accounting for about eight per cent of the bloc's ghg emissions at present. An April 2005 report of the uk -based Tyndall Centre for Climate Change Research warned that the fast increase in emissions from this sector could effectively make emission-cut initiatives in other sectors redundant by 2037.

The aviation sector itself favours the ets, claiming it will benefit the environment more than a fuel tax. During the first Aviation and the Environment Summit, held on March 17-18, 2005, aviation industry representatives opposed the tax, arguing that improvements in aircraft technology and air traffic management are the best ways to reduce co2 emissions. If one minute is saved on every flight each year, global co2 emissions will lessen by 4.2 million metric tonnes per annum, they claimed. But Jos Dings of the European Federation for Transport and Environment and Roy Griffins of the Airports Council International point out that the sector neither pays tax on fuel, nor value added taxes on international tickets. Instead, it has received billions of Euros in aid. Moreover, the Intergovernmental Panel on Climate Change has pointed out that alternatives to the use of kerosene as aviation oil (which leads to ghg emissions) won't be available for another 50 years. This means the only way to reduce dependence on oil imports is to use less.