Displaced from Kuno wildlife sanctuary earlier, the tribe is being evicted again for a dam 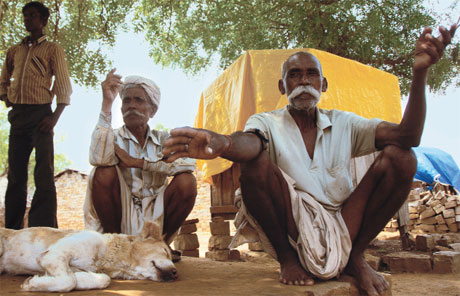 FIRST it was for the lions, now it is for a dam. People of the Saharia tribe of Kuno-Palpur wildlife sanctuary in Madhya Pradesh have once again been told to leave their homes.

In 1995, the Union Ministry of Environment and Forests had decided to translocate a pride of Asiatic lions from Gujarat’s Gir National Park to Kuno. At that time, tribal people from 24 villages in the sanctuary were moved out to make space for the big cat. The lions never arrived (see ‘Displaced for Nothing’, Down To Earth, August 1-15, 2012). Now, the Madhya Pradesh government has proposed an irrigation project on the Quari river near Kuno. If built, the dam will submerge 1,220 hectares (ha) of 10 villages in Sheopur district that are home to 1,000 families. Three of these 10 villages house Saharia people displaced from the sanctuary.

“The surveys for the proposed dam were started in May last year but no formal notice was given to the villages for a year, as required by the law,” says Syed Mirajuddin of Samrakshan Trust, a non-profit working in the region. It was only after the panicky residents seized the instruments of survey from officials in March this year that the district collector came and informed them about the project and compensation package.

Under the proposed plan, every tribal landholder is to get 2 ha and monetary compensation for the rest of his property while the non-tribals will get only monetary compensation. The adults who do not have land holdings in their names will not receive any compensation. “We lost much of our possessions in the last displacement. Now, our children have grown up and have families. It’s not fair to leave them out from compensation. Besid-es, the government compensation is much below the market rate of the land,” says Sujan Singh, of Chak village.

Residents allege they are being forced to give consent to the project without settlement of their rights over forest resources under the Forest Rights Act (FRA) of 2006. FRA recognises the rights of forest dwellers on forest resources they have traditionally been using. For instance, apart from farming, the residents have been collecting gum from a small forest patch nearby. The minor forest produce fetches up to Rs 130 per kg. “Each family sells at least 200 kg gum for 6-7 months a year. It forms half of our annual income. They will give us a new house and land but can they give us a new forest?” asks Murari Singh of Chentikheda village.

According to FRA, no forest dweller can be displaced unless his rights under the Act are recorded. The residents allege that when Chentikheda gram sabha refused to give in twice, Gyanendra Patil, the district collector of Sheopur, came and made the residents give their consent for the dam in June. He promised that their forest rights would be settled later. “In the meeting, the collector threatened that if the residents protest against the project they will not be given even the proposed compensation. The tribal people had no choice,” alleges Mirajuddin.

Asmita Kabra of the School of Human Ecology at Ambedkar University in Delhi, on behalf of Samrakshan trust, wrote to Union tribal affairs minister V Kishore Chandra Deo about the violation of FRA in the project- affected region. The minister wrote to the chief minister of Madhya Pradesh, Shivraj Singh Chauhan, to look into the matter. But the authorities do not seem to be paying heed. “All those villages are revenue villages. They cannot have claims under FRA. However, if any such claim comes from the villages, we will look into it,” says S B Singh, sub divisional magistrate of Bijaypur who is also the chairperson of the sub division-level FRA committee. The fact is that under FRA, tribal people can claim their rights over resources of forests they have been traditionally using, irrespective of the status of the land they are dwelling on.

The A ct also mandates that gram sabhas should be constituted at the hamlet level and not panchayat level to keep the decision democratic. But the gram panchayat of Arrod, under which four of the villages affected by the dam proposal fall, gave consent to the project under the influence of district authorities without calling any gram sabha, allege residents.