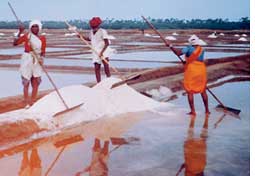 while the Andhra Pradesh government is yet to recognize salt makers as farmers, two recent government orders mention 'salt making' as 'farming' and the 'salt produced' as 'crop'. This has exulted salt farmers in Andhra Pradesh's Prakasam district.

"This is an important first step towards the official recognition that we demanded," says the Prakasam District Salt Farmers' Forum (pdsff). One of the government orders, issued on May 9, 2008, declares Rs 600 per acre (0.4 ha) as compensation for "damage to salt crop and salt lands" due to heavy rains in February 2008. Though the compensation amount is small compared to the damage, pdsff says, this is for the first time words like "crop" and "farmers" have been used in the context of salt farmers in an official document.

The second government order, dated June 6, 2008, offers a more definite triumph. It expressly orders the state electricity department to consider small and marginal salt farming at par with corporate farming in terms of tariff and provide them the requisite subsidy in electricity charges. This means, if the order is implemented, salt farmers in Andhra Pradesh will pay just 90 paise per unit of electricity as opposed to Rs 3.75 per unit, which is at par with small industrial units.

"The recognition of salt-making activity as 'farming' will enable small salt farmers to claim facilities like free electricity, crop loans, crop insurance and compensation which the government extends to the agriculture sector," says convenor of pdsff, R Pothuraju.