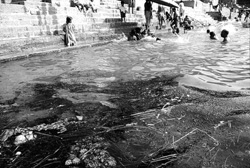 one can't use these salts for cooking, but, with chemical structures similar to table salt, ionic salts could be useful in clearing environmental pollution. Ionic salts, present in liquid form, characterised by low melting temperatures, may one day become the environment-friendly replacement for some of the noxious solvents used by industry today.

The so-called ionic salts were first formulated in the 1940s but remained novelties. "They look terribly ordinary, quite like water," says Kenneth R Seddon, professor of chemistry at Queen's College in Belfast, Ireland. Only in the past few years have chemists started thinking of them as a medium for performing chemical reactions. Althoughyears away from widespread industrial use, ionic liquids are attracting attention of companies like Exxon Mobil and BP Amoco.

The most evident advantage of using ionic liquids could be environmental. Chemical reactions producing materials ranging from polyester to pharmaceuticals generally employ organic solvents. A common example of an organic solvent is paint thinner. But the fumes of these solvents are often dangerous if inhaled and can contribute to the formation of smog. Most ionic liquids emit little volumes of fume, and the salts can be easily recycled and reused, eliminating many of the problems and costs of disposing of solvents.

The resemblance of ionic liquids to table salt is in their chemical bonds. Sodium chloride, the chemical name of table salt, consists of equal parts of sodium and chloride. Because of how the laws of quantum mechanics place electrons around a nucleus of an atom, a sodium atom has a loose hold on its outermost electron. One may think of the sodium atom as an auditorium with electrons seated inside. A lone electron sits in the outermost balcony row, closest to the exit. By contrast, the top level of electrons in a chlorine atom is full, save for one spot. A chlorine atom readily yanks the loose electron away from a nearby sodium atom. That electron shift leaves the sodium positively charged and the chlorine negatively charged, and the two are pulled together. The sodium and chlorine pairs then stack up to form a crystal of salt. When heated, the atoms in salt crystal start vibrating. The vibrations become so strong that the salt crystal melts into a liquid. Hot molten sodium chloride is of little use, but in an ionic liquid, a molecule with a similar loose electron takes the place of sodium and a second molecule is inserted for electron-grabbing chlorine ion.

Because these molecules are larger than sodium and chlorine atoms, they do not stack up as neatly. The molecules are not held together tightly and the compound melts at much lower temperatures. Because the liquid is made of ions rather than molecules, the chemical properties are different from those of conventional organic solvents.

By switching the molecules used in the ionic liquids, chemists will be able to custom design properties in their solvents. Seddon estimates one trillion possible combinations. "You've got this incredible flexibility with ionic salts," he says. Ionic liquids can be mixed together to tweak their properties further. James Davis, professor of chemistry at the University of South Alabama, usa, gives the example of designing an ionic liquid that is able to bind with heavy metal pollutants like mercury and cadmium. Shaking contaminated water with the ionic liquid will enable the ionic liquid molecules to pull the heavy metals out of the water. The ionic liquid and water will then separate, and the clean water can be poured out.

Besides, ionic liquids are often better reactants than traditional solvents and can enable some novel chemical reactions. Ionic liquids will, most likely, first find application in high-cost products like pharmaceuticals with large-scale industrial applications following years later, says a report in the New York Times dated April 27, 2001. But chemists still lack fundamental understanding of how ionic liquids work and are looking at years of research before they can come up with commercial applications.