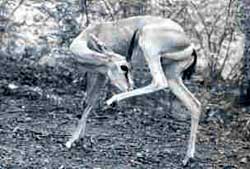 THE Gujarat legislature passed a bill in July 1995, reducing the area of the Narayan Sarovar Sanctuary in Kutch, Gujarat, to 444.23 sq krn from the earlier notified 765.79 sq km. Narayan Sarovar, famous for chinkaras, has become the battle ground for developmentalists and conservationists over the last few years, since rich lignite and limestone deposits were found within the sanctuary.

Recent findings from independent investigations carried out by P M Bhargava, a senior scientist with the Indian Institute of Chemical Technology, Hyderabad, and his colleague Chandana Chakrabarti, also support the government's steps for reducing the sanctuary boundary. They surveyed the sanctuary from June 27 to 28.

Their report states that large tracts of forest land marked as sanctuary, was actually degraded with very few trees and no scrub vegetation either. The report concludes that "there seemed to be nothing unusual about the flora in the sanctuary area that would make it distinctive enough and justify a sanctuary on the basis of its flora." Bhargava and Chakrabarti point out that villagers dwelling inside '- ---- -a, Ila- PQtimnted the number of chinkaras to a maximum of around 100 at present. And there are only 2 streams in the sanctuary serving as water sources for the animals. The soil of the sanctuary area is not conducive to high agricultural yields. The villagers also face severe fuel and water scarcity. Hence, the report conclude, that the initial declaration of the Sanctary area was done without proper investigations, and that its boundary should be reduced keeping out the parts rich in mineral resources. It proposes that the sanctuary area be fenced off and adequate food and water sources be mad, available to the animals.

Interestingly, the report lays down certain protocols for setting up of ary industry in the sanctuary area, based on dialogues between the villagers and the investigators. Among several suggetions, the protocols envisage employment with fair wages; provisions , electricity, water and education, head and medical care; sustainable partnership with the local people and con C for the environment.

At present, the poor villagers not have any stake in the management of the sanctuary. It is possible they might welcome limestone lignite mining in the area in hope employment.