Sand mining continues unabated in Tamil Nadu there are no signs of any let-up in the quarrying of river sand in Tamil Nadu. This despite the Madras High Court staying the activity on all sites except the 79 owned by the state government 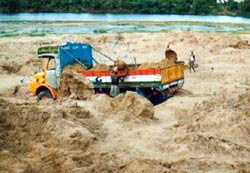 there are no signs of any let-up in the quarrying of river sand in Tamil Nadu (tn). This despite the Madras High Court (hc) staying the activity on all sites except the 79 owned by the state government.

"Not only is rampant quarrying taking place, the public works department (pwd) itself has called for tenders from private miners to extract the sand," alleges Ossie Fernandez, state committee member of the Campaign for Protection of Water Resources-Tamil Nadu (cpwr-tn), a forum of 80 organisations working to protect water resources. In this way, the pwd is undermining the very purpose of the state government's decision to wrest control of mining operations.

On October 1, 2003, the tn government took over the right to exploit sand at 239 locations in the state's riverbeds, to the exclusion of others. It effected the move by amending the Tamil Nadu Minor Mineral Concession Rules 1959, as provided by Rule 38 (a). The pwd was authorised as the sole agency to carry out the mining activity. This raised the hackles of existing private leaseholders, and they challenged the validity of Rule 38(a) by filing writ petitions in the hc. Subsequently, the high court restrained both parties from exploiting sand on 160 sites.

But it is evident that the court directive is not being followed. Fernandez points out that while quarrying beyond a depth of one metre is not allowed, the pwd is issuing tenders to private miners who use sand excavators. These machines can scoop out sand from a one-metre depth in one go, adds Fernandez.

The cpwr-tn had organised a public hearing on the issue in February 2002. It highlighted the adverse impacts of sand mining on the 33 river basins of the state. These included a severe dip in groundwater levels, fall in agricultural production, drying up of wells, curtailed flow of river water to downstream areas, and threat to the safety of bridges, dams and electric poles. The fallout was said to be worse in the case of mechanised mining.

Experts feel that the takeover of operations by the state government is not going to mitigate the harmful effects of sand mining. "When sand is removed for the benefit of miners, the government and the people living in urban areas, the villages near the site suffer the most," asserts G Palanithurai of Gandhigram Rural Institute, a university situated in Dindigul district of tn. "There should be a complete ban on sand mining at least till a scientific study is conducted. And only local bodies should be allowed to exploit the mineral, that too not for commercial use," says Fernandez.

River sand is classified as a minor mineral and under Section 15 of the Union government's Mines and Minerals (Development and Regulation) Act, 1957, the state government is empowered to frame rules for its exploitation. The construction industry boom since the 1990s has led to an enormous demand for sand -- Chennai alone requires 3,000 lorryloads every day, each costing Rs 7,000. To cater to the huge demand, sand miners regularly exceed permitted limits, leading to a loss of revenue to the state.