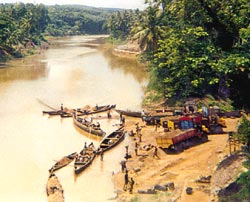 The Kerala government has taken another decentralising step. It has handed over exclusive rights of mining and sale of sand from riverbeds to local bodies. The state's minister for revenue, K M Mani, admitted that the previous practice of mining and transportation of sand by private parties after securing permits from the Geology Department led to widespread corruption.

Under the amended rules, now local bodies can either auction the sand to the highest bidder or sell it by charging a fixed price. An expert committee at the district level would determine the amount to be mined. Fifty per cent of the royalty will be handed over by the district administration to the respective local body; the rest will be deposited in the river management fund of the district collector.

To check corruption, transporters have to carry permits signed by the local body secretary and counter-signed by the taluk officer (block officer).