What makes one prone to heart diseases and joint pain in malaria can be understood by applying basic fluid dynamics to blood flow—the same concept works on water pipes.

Unlike environmental or genetic factors associated with the diseases, the flow of fluids is governed by well understood principles. Understanding does not always help treat or prevent the disease but as Enrico Fermi, an Italian-American physicist, said, “Whatever nature has in store for mankind, unpleasant as it may be, men must accept, for ignorance is never better than knowledge.”

At the annual meeting of the physical society held at Minneapolis in usa, in November 2009, physicists discussed the application of fluid dynamics in a biological context.


They talked about the various facets of blood flow in cardiovascular diseases and infections that target blood cells. For example, red blood cells infected by the malaria parasite are stiffer and stickier than normal ones and flow differently in the vessels.

Blood flow is essential for complex vertebrate nourishment and excretion of by-products of metabolism. Any obstruction of normal blood flow is serious. This is where the principles of fluid dynamics make an entry and take priority in research. For example, a leading cause of heart attacks in older people is atherosclerosis: a reduction in the diameter of arteries due to formation of lipid-filled plaque that obstructs blood flow. The law that explains this is the Hagen Poiseuille principle. This relates to the drop in pressure as a fluid flows through a pipe, depending on how wide the pipe is. The implication is that even a small reduction in arterial diameter would increase the amount of work the heart does just to keep up, leading to a progressively stressed heart. Researchers have used the Hagen Poiseuille principle to explain heart attacks. 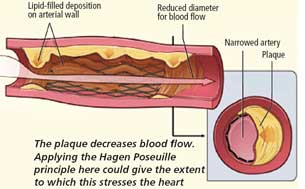 Surgeons also find the laws of physics useful. For example, in a cardiac bypass surgery an aortic cross-clamping is essential. It causes blood to stop flowing into the region of surgery. There is a reversal of blood flow as it bounces off the clamp. But this action can also initiate atherosclerosis. This is because cells lining blood vessels are sensitive to the direction of blood flow. In case of any obstruction they activate genes to combat potential infection which can lead to the disease.

The computational modelling of blood flow as the clamp is put in place was shown by Ghassan S Kassab, professor at Indiana University–Purdue University at Indianapolis in usa. “It has to do with the design of the clamps. Flat clamps seemed to cause less damage to the walls of the arteries than other designs, however all of them cause some level of injury that can lead to atherosclerosis,” said Kassab, who presented his work at the conference in Minneapolis. The only way out is using clamps with sensors that alert surgeons when the vessel walls are being subjected to harmful stress. We are working on those,” he added.

Where else do the laws work?

A butterfly’s proboscis works like a paper towel that soaks up the liquids via capillary action. Technology inspired by this can be used to make small probes that sample cellular fluids. This is just one of the several fields of biology in which the principles of fluid flow are applicable—the most important of them all being drug delivery.

Conditions like asthma are often treated using inhalers that disperse drugs in small aerosols. The process is complex because the lung airways are intricately branched and come in variable sizes—from the trachea about two centimetres in diameter to bronchioles which measure less than a millimetre and finally tiny alveoli (~100 micrometres). In such cases, scientists determine the fate of an aerosol particle by characterizing the velocity, viscosity and density of flow with the Reynolds number (Re). Re is directly proportional to the airway’s diameter and the rate of inhalation. A high value means there is resistance to the flow.

The interiors of lungs are very sticky because of mucus and thin protrusions called cilia that filter the air. Larger particles like dust and pollen grains stick to them, instead of going with the airflow. “It is like throwing a ball against a sticky wall; it experiences inertial impaction as it hits,” said Steven Vogel, biology professor at Duke University in usa and biomechanics expert.

So how can one make aerosols reach deeper into the lungs? Re comes to the rescue. First make them small and lightweight. Then lower Re by lowering the rate of inhalation. Imagine throwing a small air-balloon and then having a whiff of air blow right by; it is more likely to go in the direction of the wind. Any doctor would say, inhale the nasal spray slowly, hold your breath for a bit and breathe in.