Sanitation and well being

Women in rural areas face humiliation due to absence of safe bathing spaces. Can Swachh Bharat Mission address this issue? 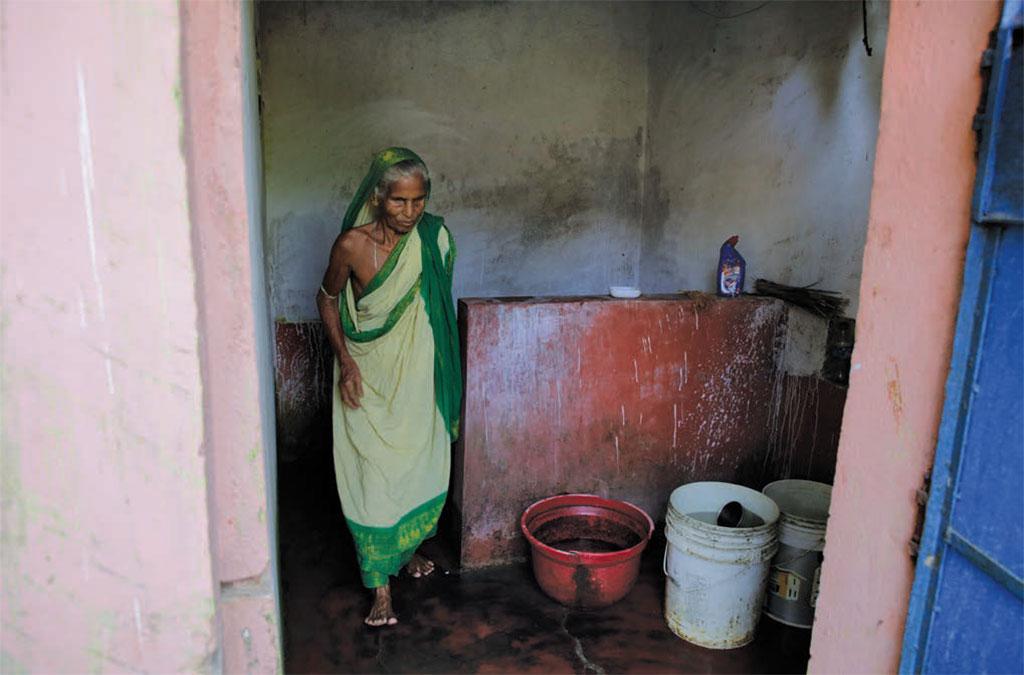 Social norms dictate that a woman should protect her modesty by dressing and behaving “appropriately”. Although such norms are strictly followed in India, in many parts of the country, women are expected to bathe in the open.

It is shameful that even today safe and private bathing do not exist in majority of the rural areas for women. According to the 2011 Census, 55 per cent of rural households do not have any kind of enclosed bathing space within the premises and this proportion rises to an alarming high of 95 per cent in poorer pockets of India. Women have no option, then, but to bathe fully clothed in nearby ponds, wells, hand pumps or streams.

Apart from hygiene, this compromises their dignity as well. The water in which they bathe is used for washing utensils, clothes, and even menstruation clothes, which can lead to various bacterial and fungal infections. The problem gets acute when there is a scarcity of water and multiple communities and castes live together. Often, long walks for carrying water means sanitation and hygiene gets overlooked. To probe this issue, focus group discussions and interviews were conducted from September 2016 to September 2017 with women from rural areas of Jharkhand, Bihar, Odisha, Madhya Pradesh, Maharashtra and Rajasthan.

In an exploratory study conducted in Gaya, Bihar, majority of the participants admitted to facing inconveniences due to absence of private bathing spaces. Although women from upper caste families had bathrooms, they were not ready to be interviewed. Women from lower castes usually bathe either in the open or in some kind of makeshift arrangements where sari/plastic covered a small portion in the house or in the backyard. Out of the 55 women interviewed, 53 per cent had either a temporary arrangement or took bath inside the house when men were not present. The rest of them simply bathed near a hand pump or a pond. In almost all the villages, women have separate spaces for bathing where men are prohibited. However, this is not followed in some communities, as a result of which women face eve teasing and lewd comments. Women face embarrassment when walking back home in wet clothes. They are not even able to clean their private parts properly, leading to skin infections and rashes.

Talking about their menstrual hygiene practices, around 49 per cent reluctantly shared that they had to wait to change their spoiled clothes when no one was around. It can be imagined how a daily chore can turn into a troublesome task for these women. 63 per cent admitted that they cleaned the menstrual cloth or threw the used sanitary napkin in the same place where they took bath. When asked about their health and symptoms of certain gynaecological morbidities, back pain, lower abdominal pain and coloured vaginal discharge were highly self-reported by most of the participants. A middle-aged woman from Kusa village in Sherghati block of Gaya said, “We are aware that not bathing daily can cause infections and bathing near hand pump fully clothed does not allow us to clean ourselves properly. But what choices do we have? We do not have enough time or money to waste on building bathrooms. When you have so many mouths to feed, you tend to prioritise them rather than building bathrooms.”

Our research in Gaya and some villages in Jharkhand, Odisha and Rajasthan show that the compromise and drudgery that rural women face due to the absence of secured bathing spaces is far more severe than one can expect.

In spite of feeling uncomfortable and insecure, these women either do not complain or are unaware of the grave health risks that bathing in the open can lead to. For them, bathing is an age-old practice that has been carried out in the open. It is paradoxical how this issue has not been raised in the public forum when talks about toilets are in full swing. Can it be because women tend to suffer in silence accepting it as their destiny? Or is it related to their lack of access to resources?

The physical stress of carrying water from hand pumps and other sources and the mental strain of performing all their household chores along with maintaining hygiene with limited water takes a toll on their health and life. Many developmental activists say that women’s struggle with sanitation arises due to lack of water. While there is a long way to go for the construction of bathrooms to become a policy mandate, it is important to put greater stress on making water available to every rural household.

Past literature and qualitative research suggests that access to water, toilet and bathroom facilities have a significant relation with a woman’s well-being. That said, the issue of limited access to secured bathing spaces with adequate water needs immediate attention. When the movement of building toilets under the Swachh Bharat Mission is in a full-fledged mode, it is time to find a way to integrate secure bathing spaces with access to water in that programme.

(The authors are junior research fellows at Vikasanvesh Foundation, an initiative of TATA Trusts)