Ideology rules the roost in USA 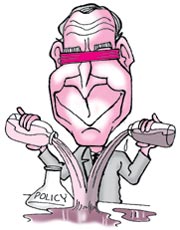 the science policies of the Bush administration are skewed to suit ideology, and they often ignore scientific studies that do not support the viewpoints of the Conservatives. Scientists and Democrats have made these allegations in a report by the us House of Representatives' government reform committee. "Our report amply illustrates the efforts made to manipulate, distort and suppress science," says Henry Waxman, the lead author.

Among other things, the report accuses the Bush administration of posting a page on the website of the us National Cancer Institute that incorrectly linked abortion with breast cancer. It also accuses the White House of appointing a researcher to a advisory panel of the Centres for Disease Control and Prevention, who believes children can remain healthy with lead levels in their blood much higher than the prescribed limits.

Endless examples have been cited. In March 2000, the Army Corps of Engineers proposed new regulations to protect wetlands. But after the National Association of Home Builders filed a lawsuit against the proposals and thereafter president Bush took office, the corps reversed course.

Even the agricultural policies favour polluters. In 2001, Ann M Veneman, secretary of the us department of agriculture (usda), promised that her office would give farmers "the appropriate tools to continue to make the best decisions" on how to protect the environment. However, in February 2002, usda officials told top scientists in the department's Agricultural Research Service to seek prior approval on all manuscripts pertaining to 'sensitive issues' like contamination of water by hazardous materials (read: pesticides).

The White House has denied the allegations. "The only one putting politics above science is Waxman, whose report is riddled with inaccuracies," says Scott McClellan, a spokesperson of the White House. He said the administration was particularly proud of its aids policies. However, the Alan Guttmacher Institute, a us -based non-governmental organisation (ngo), recently released a report accusing the Bush administration of distorting data on condoms and cervical cancer to discourage condom use and promote instead its 'abstinence only' agenda.

As per the ngo 's report, the us global aids law requiring an analysis of how condoms have been able to stop the spread of human papilloma virus -- the main cause of cervical cancer -- is quite uncalled-for. "The requirement is redundant, as the virus mainly spreads through skin contact," says Cynthia Dailard, who wrote the report.